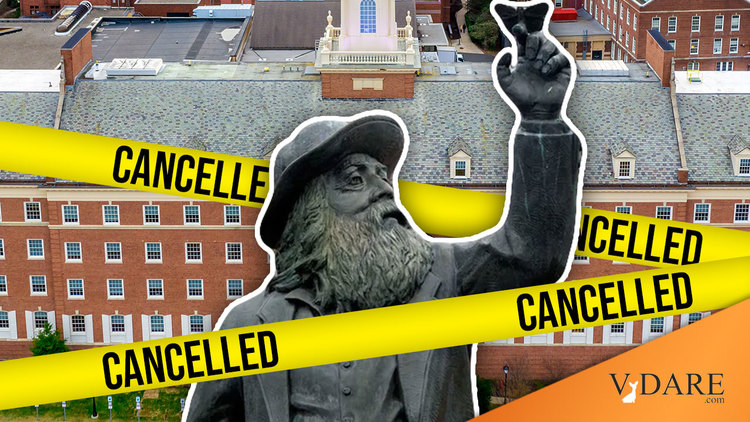 I have a very, very slight interest in Walt Whitman. I find his poetry completely unreadable. If a poet wants me to give up my time to reading him, his verses must satisfy not less than two of the following three conditions:

The score on those three conditions has to be two or three. The few pieces of Whitman's verse that have been offered to me were ones and zeroes. Sorry, pal.

However, three miles south of my house here on Long Island is the Walt Whitman birthplace and museum. That's my very, very slight interest.

EXCLUSIVE: "Walt" Whitman, American bard who claims to be "one of the roughs," was born into this charming country home in plush Huntington township, Long Island (avg property value, $520,000) https://t.co/Sgnmop9t3E pic.twitter.com/cMcgCC9t4L

I have only been to the birthplace once. That's when Steve Sailer was staying over with us and we were struggling to think of local attractions Steve might find entertaining. We took him to the dwarf-tossing contest, the quilting social, the aardvark races, and the all-Island flatulence final; then, unable to think of anything else, we showed him the Whitman birthplace. Steve was quietly respectful. That aside, I have retained no memory of the birthplace at all.

Now I see that Whitman has been canceled. A statue of the old shirt-lifter on the campus of Rutgers University in Camden, New Jersey is to be  "relocated to a historically relevant site on campus and contextualized".

Why? Why do you think? Quote: "He … stood for white supremacy and racism against Black and Indigenous Americans". Translation: He was a white guy and not a communist.

That last quote was from a petition circulated by student activists last year.

I have a suggestion for those activists. The Whitman birthplace here on Long Island occupies a fair-sized slab of prime real estate on a main shopping street, right opposite Mrs. Derbyshire's favorite mall. We sure could use another parking lot down there. Some of the birthplace buildings are old wooden structures. They would burn real easy …