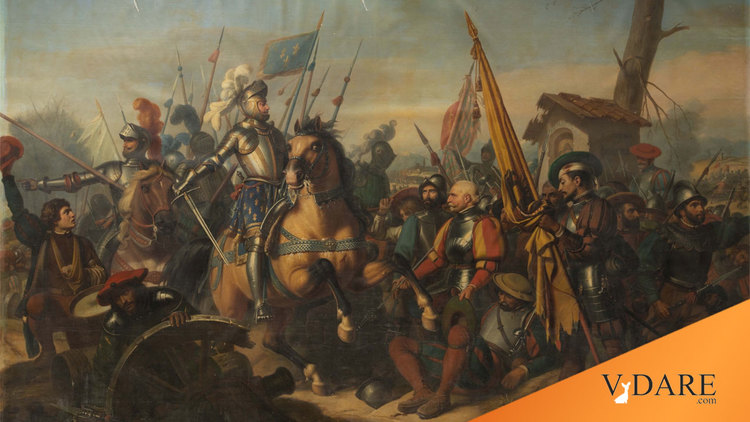 The medievalist blog Quod Libet has a number of posts up disputing the estimates of historical violence levels in Steven Pinker's big book The Better Angels of Our Nature.

For example, was An Lushan's 8th Century revolt in Tang Dynasty China really one of the bloodiest event of all time? How can we confidently count the Mongol death toll? How about the Albigensian Crusade?

And are Pinker's estimates of the murder rate in the high middle ages reliable?

I took the opposite tack of pointing out that our having any statistics from the late medieval period suggests that they were more orderly than from earlier Dark Ages periods when we don't have any numbers. In many ways, I subscribe even more to Pinker's hypothesis of a general trend toward orderliness than he does. Unlike Pinker and his wife, I don't see that trend as largely restricted to the Enlightenment. As I wrote in The American Conservative:

Pinker then skips the long Dark Ages, during which the Catholic Church tried, with the slowest success, to turn the illiterate Conan the Barbarian warlords who had overrun Europe into gentlemen. He lands next in the high medieval period. To Pinker, feudalism must represent anarchy because there is no overweening Leviathan to enforce order. To Europeans alive at the time, however, their newly mature feudalism provided them with “stationary bandits”—to use economist Mancur Olson’s term—who protected them from the more terrifying “roving bandits.” The French monk Raoul Glaber exulted in the 11th century that it was as if “the whole world were shaking itself free, shrugging off the burden of the past, and cladding itself everywhere in a white mantle of churches.”

To the visual historian Lord Kenneth Clark, host of the 1969 PBS documentary “Civilisation,” the construction of towering Gothic cathedrals demonstrated that the 12th and 13th centuries were self-evidently better ordered than the wasteland centuries that had preceded them. But Pinker can’t plot the Middle Ages’ improvement over the Dark Ages on his charts because there is no data from the Dark Ages. So he feels free to ignore the considerable progress that Christendom made.

Here's Pinker's FAQ on his book, which is well worth reading because he attempts answers to many common objections there, most of which he already included in his book. He really has thought longer and harder about this topic than most people have and has anticipated most of the objections.

The journalist Steven Sailer recounts an exchange from early 20th-century England: "A hereditary member of the British House of Lords complained that Prime Minister Lloyd George had created new Lords solely because they were self-made millionaires who had only recently acquired large acreages. When asked, "How did your ancestor become a Lord?" he replied sternly, "With the battle-ax, sir, with the battle-ax!"

The secret to being quoted in important books is poor sourcing: although that anecdote made a vivid impression upon, I have no idea anymore where it's from. So, at the moment, I'm the best source!