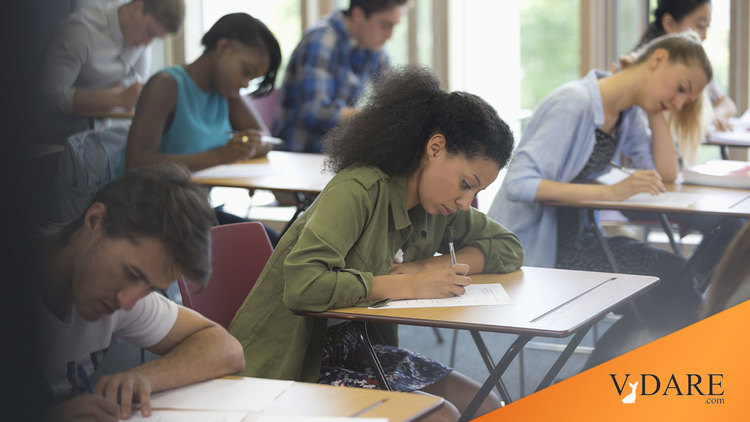 Holtz points to this Pew Trust study from about a dozen years ago, “Upward Intergenerational Economic Mobility in the United States,” by economist Bhashkar Mazumder using data on young later Baby Boomer 14-23-year-olds gathered in the 1979 National Longitudinal Study of Youth database (the same one used in The Bell Curve).

Individuals with higher test scores in adolescence are more likely to move out of the bottom quintile, and test scores can explain virtually the entire black-white mobility gap.

Figure 13 plots the transition rates against percentiles of the AFQT test score distribution. The upward-sloping lines indicate that, as might be expected, individuals with higher test scores are much more likely to leave the bottom income quintile. For example, for whites, moving from the first percentile of the AFQT distribution to the median roughly doubles the likelihood from 42 percent to 81 percent. The comparable increase for blacks is even more dramatic, rising from 33 percent to 78 percent. Perhaps the most stunning finding is that once one accounts for the AFQT score, the entire racial gap in mobility is eliminated for a broad portion of the distribution. At the very bottom and in the top half of the distribution a small gap remains, but it is not statistically significant. The differences in the top half of the AFQT distribution are particularly misleading because there are very few blacks in the NLSY with AFQT scores this high. The more years of schooling both black and white children attain, the more likely they are to move up and out of the bottom quintile. However, years of completed schooling explains little of the black and white economic mobility gap.

One thing to keep in mind about the NLSY79 is that the military’s AFQT entrance exam probably exaggerated the race gap a little because the test was 105 pages long and more blacks than whites gave up part way through and bubbled in the rest. The NLSY79 saw an 18.6 point AFQT gap, but 18 years later the NLSY97, giving the AFQT on computers with adaptive questions (get some right, get harder questions, but if you get some wrong, you get easier questions) only saw a 14.4 point race gap.