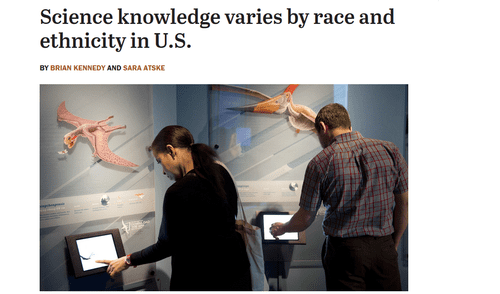 Science knowledge varies by race and ethnicity in U.S.
BY BRIAN KENNEDY AND SARA ATSKE

U.S. racial and ethnic groups vary significantly in their knowledge of science-related issues, according to a new Pew Research Center survey that quizzed Americans about subjects ranging from life and physical sciences to numeracy and chart reading.

On average, whites got 7.6 questions correct while Hispanics got 5.1 and blacks 3.7. English-speaking Asians got an average of 7.0 correct answers, but it’s important to note the survey was only conducted in English and Spanish. (Asians are less likely than whites and blacks, but not Hispanics, to be proficient in English.)

Interestingly the rank order of whites>Hispanics>blacks were seen on each of the eleven questions.

I’ve been following baseball stats since 1965 and social science statistics since 1972. In general, this is why cognitive statistics aren’t as interesting as baseball statistics. Sports statistics change over time and pop up surprises, but education related stats are quite repetitive.