The Crusades and Crusaders get a lot of battering from the politically correct these days, including Susquehanna University which now wants to be more “inclusive,” because apparently they don’t want headchopping jihadists to feel left out.

And who can blame the university? No less of a person than President Obama bashed the original Crusaders as committing “terrible deeds” during the annual prayer breakfast in 2015:

OBAMA: “Unless we get on our high horse and think this is unique to some other place, remember that during the Crusades and the Inquisition, people committed terrible deeds in the name of Christ. In our home country, slavery and Jim Crow all too often was justified in the name of Christ.”

Jihad expert and author Robert Spencer (who is well informed about the period) remarked, “The Crusades were actually a late and small-scale defensive response to 450 years of Islamic jihad aggression.”

In General Dwight Eisenhower’s 1944 D-Day message to the troops, he characterized their efforts to free the continent of Europe from the Nazi jackboot as a Crusade. The word had positive connotations until the anti-civilization left inserted its hooks.

EISENHOWER: Soldiers, Sailors and Airmen of the Allied Expeditionary Force.

You are about to embark upon the Great Crusade, toward which we have striven these many months. The eyes of the world are upon you. The hopes and prayers of liberty-loving people everywhere march with you. You will bring about the destruction of the German war machine, the elimination of Nazi tyranny over the oppressed peoples of Europe, and security for ourselves in a free world.

Perhaps it is a hopeful sign that the image of Crusaders is reappearing in Europe, which is once again besieged by an evil foe.

Below, German patriots disinvite invasive illegal alien jihadists from Europe with a banner showing a Crusader. 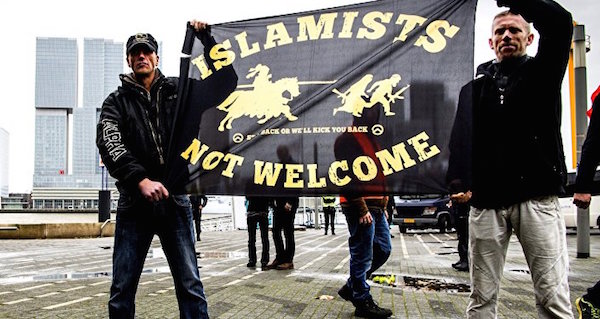 Here is an article about the university brouhaha:

A Pennsylvania university is searching for a new mascot and nickname to replace its longtime “Crusaders” moniker, which the school says is “at odds” with its “values and commitment to diversity and inclusiveness.”

Susquehanna University is asking people to submit their top choices for a replacement by Jan. 25. The top contenders — which might include the Bobcarts or River Otters — will then be submitted to the university president, who will in turn present them to the school’s board of trustees, a university spokeswoman told FoxNews.com Tuesday.

The school’s board of trustees voted in October to replace the Crusader name, after consulting with alumni, students, faculty and staff.

The Crusader name, which was first used by a Philadelphia sports writer in 1924, was a reference to then-Susquehanna athletic director Luther Grossman’s “crusade” to bring integrity to intercollegiate athletics.

“Many critics of the term Crusader feel that connotations of the word — related to the medieval Crusaders who used violence in the name of religion — are at odds with the university’s increasing diversity and its commitment to embracing and respecting difference,” the school said in a statement obtained by FoxNews.com.

“Moreover, many students have long indicated a desire for an unambiguous mascot that they could rally behind,” the school said.

In June, the Board of Trustees asked President L. Jay Lemons to engage in a conversation with the school community about the name and mascot, and to return to them with a recommendation as to whether to keep Crusader or make a change.

According to the school, Lemons carefully listened to input from students, alumni, staff and faculty over the next several months and decided the name and mascot should be changed.

“Symbols are important and powerful,” he wrote in his recommendation to the board. “An institution’s mascot and nickname should be beloved and unifying symbols,” he noted, adding that has not been the case with the Susquehanna Crusader for some time.

“Our ambivalence and discomfort with the ‘Crusader’ nickname has contributed to its decline. We have not been able to attach our identity to our own unique definition of Crusader,” he said. “To continue down that path would be unproductive and at odds with the university’s commitment to building an inclusive campus where individuals of all cultures are welcome.”

In 2000, Wheaton College in Wheaton, Ill., dropped its Crusaders name and changed it to Thunder. Other schools have since followed suit, including Maranatha Baptist University in 2014, Eastern Nazarene College in 2009, University of the Incarnate Word in 2004 and Point Loma Nazarene University in 2003, which changed its name to the Sea Lions.

The school said Monday it had narrowed its list of 400 suggestions to five choices: the Susquehanna Bobcats, Explorers, Phoenix, River Hawks and River Otters. The school is urging the university community to rank which of the names they like best in an online survey to be submitted by Jan. 25.