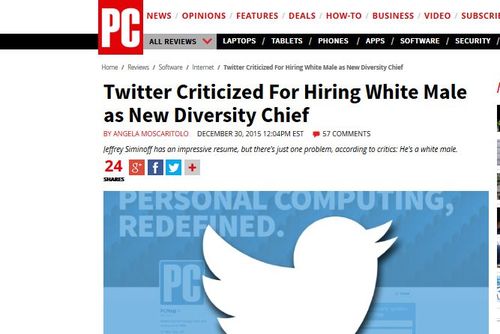 I've been waiting years for peak political correctness to arrive.  Is it now here at last?

Twitter has in the past admitted that its workforce skews very heavily male and white, but the company is hoping a new hire will help change that.

The microblogging service this week announced that Jeffrey Siminoff will join the company to lead global diversity and inclusion at Twitter. Siminoff has an impressive resume as Apple's former Director of Worldwide Inclusion and Diversity, but there's just one problem, according to critics: He's a white male.

His appointment was criticized by diversity supporters such as Mark S. Luckie, who doesn't seem to have a problem with Siminoff himself, but said it "makes no sense" to hire a white male for the role.

"Not saying a white guy can't be head of diversity but for a company that hires a majority white guys it sends the wrong message," Luckie wrote on TwitterTuesday. "I'm sure he's a great guy but you've set the company back instead of moving it forward." [Twitter Criticized For Hiring White Male as New Diversity Chief by Angela Moscaritolo; PC Magazine; December 30th, 2015.]

I haven't read a copy of PC Magazine since back in the Lower Paleolithic when they used to print the actual 8086 Assembler code for handy small utilities.  Possibly the readership has changed; but back then it was Ice People geeks like, well, me.  That demographic has, or at any rate had, a pretty high SJW component.

Hope is of course a demon sent up from the netherworld to torment us, but I make bold to ask again: Have we reached peak PC at last?

(I confess I don't get Twitter.  A marketing-savvy friend told me I should post to Twitter when a Radio Derb podcast goes online, so I do.  Then I tweet again the following week when I archive the transcript.  I tweet when I publish anything in print, except when I forget.  Those tweets aside, I haven't been able to figure out any way to use the thing.  I concur with Steve Sailer's observation that Twitter is "the intellectual equivalent of being bombarded with pingpong balls.")