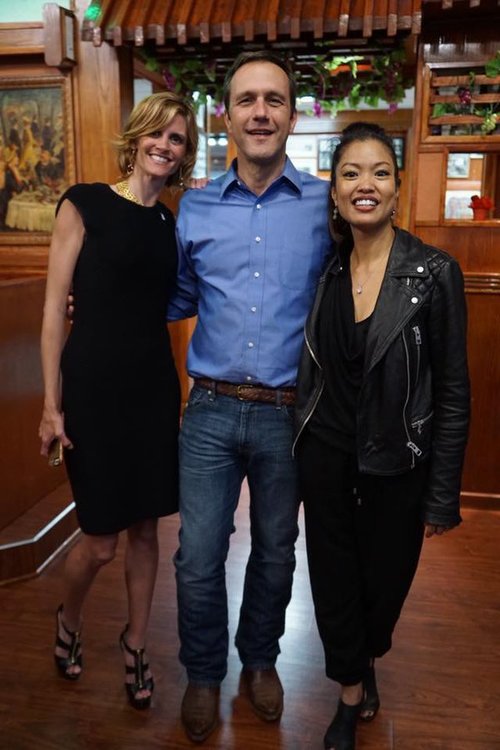 On August 9th, Republican voters of the First Congressional District of Wisconsin have a chance to make history.

August 9th is the scheduled date of the Republican congressional primary pitting challenger Paul Nehlen against incumbent Paul Ryan, Speaker of the House and Open Borders Fanatic with an F score from Numbers USA. (Right, Nehlen poses between Sara Blackwell and Michelle Malkin at the Memorial for American Workers event outside the Abbott Labs facility.)

Let’s imagine that Trump wins in November but Paul Ryan remains in the speakership. What things might Ryan do to impede Trump’s agenda?

Therefore, it makes sense that Trump supporters would support Nehlen, to cut Ryan off at the pass and prevent him from even remaining in Congress, much less remaining as Speaker.

Challenger Paul Nehlen is not another lifelong politician, but a business executive/inventor who got fed up with what Paul Ryan is doing and oppose him.

Here at VDARE.COM we can’t endorse candidates, but we can inform the public as to what is going on.

Click here to access Paul Nehlen’s campaign website, candidate. The Get Involved section has a place where you can volunteer to work on Nehlen’s phone bank. Click here for more background on the candidate.

Here is part of what World Net Daily’s Paul Bremmer had to say about the race in his article Meet the Republican Trying to Oust Paul Ryan :

Paul Nehlen is just one of hundreds of candidates running for a seat in the U.S. House of Representatives this year, but the businessman and inventor is running as if he’s in a national race. In a way, he is.

His Republican primary opponent, after all, is House Speaker Paul Ryan. And with the election scheduled for Aug. 9, national attention is intensifying as the campaign comes down to the wire.

“It’s absolutely a national campaign,” Nehlen told WND. “Paul Ryan opposes 92 percent of the GOP electorate on immigration and seven out of 10 voters on the Muslim refugee pause. Think about that for a moment. That is monumental.

“Paul Ryan has said he will not fund a wall and he will sue Donald Trump over his comments on Muslim immigration. It would be everything Paul Ryan could do to cause Mr. Trump to be a one-term, ineffectual president.”

Nehlen never thought he would run for office, much less challenge the sitting speaker in a primary. He has spent his life in manufacturing and industry. He currently serves as senior vice president of operations for a water filtration and disinfection technologies company, and as an inventor he recently secured his fifth patent.

However, when Nehlen read Sen. Jeff Sessions’ report on what was in the new Trans-Pacific Partnership deal, he immediately dashed off a letter of protest to Ryan, who was his congressman. He also phoned Ryan’s office to see if what Sessions wrote was true, but he didn’t get an answer. He had to go to other countries’ websites to verify what he had read about the TPP was true.

“I was absolutely incensed,” Nehlen recalled.

The businessman warned anybody who would listen about the TPP. Meanwhile, Nehlen also saw Ryan save the Export-Import Bank by attaching it to a $300 billion highway bill. He dug into Ryan’s campaign financing and discovered the speaker had received big donations from Beltway insiders with vested interests in the TPP and the Export-Import Bank.

“I cannot describe the level of betrayal that that represents,” Nehlen said. “I’ve had well over 10,000 employees in my lifetime globally, and I started out in a factory at 18 years old, and it took me 12 years to get my engineering degree. I’ve run businesses all over the globe. I just got my fifth U.S. patent a week and a half ago, and I will not stand by while Paul Ryan burns it all down.”

Nehlen had thought somebody else would challenge Ryan in his 2016 primary, but no one stepped up to the plate. So Nehlen, the lifelong businessman, took on the job himself.

The article also includes Nehlen’s thought on the Islamic immigration issue. Unlike so many others, Paul Nehlen understands that, in the long run, Islamic Shariah law is more dangerous than terrorism.

“We need to be able to name and identify our enemy, and it is anybody who is Shariah-compliant,” he said. “The break point isn’t terrorism; the break point is Shariah. Shariah is absolutely in conflict with the U.S. Constitution.”