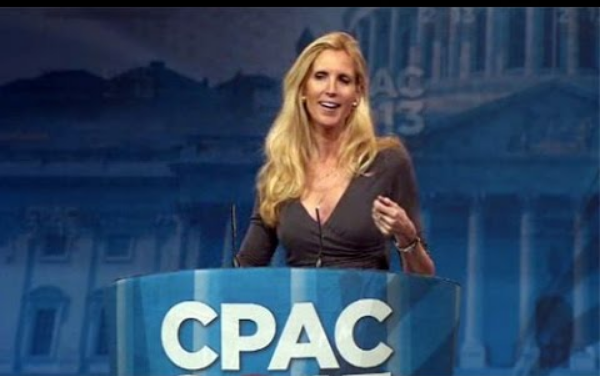 Ann Coulter: 'Everything Comes Down To Immigration.' And Sen. Ted Cruz [R-TX] Is There To Hear Her

I was as delighted as Peter Brimelow by columnist and controversialist Ann Coulter's 22-minute-long speech to the 2013 CPAC audience [video link here].

To encourage VDARE.com readers to view the speech for yourselves, I've transcribed several of her meaty, anti-amnesty remarks, each labeled by its starting time within the video.

I can see why the Democrats would want amnesty, but why on earth are Marco Rubio and these endless Bushes supporting it?

@12:58 [in response to a question about New Jersey's Governor Chris Christie, a Republican]:

Did you see his [2012 Republican national] convention speech?  It was really bad.  And I must say that, though as you know I've loved Chris Christie, I'm now a single-issue voter against amnesty, so Christie's off my list. [pause] Our next speaker, Ted Cruz [newly-elected Republican U.S. senator from Texas] is still on my list.

Teddy Kennedy specifically designed his Immigration act of 1965 to change America demographically, without checking with the American people.  It's virtually impossible to immigrate from Europe now.  About 80 percent of our immigrants for the last 30 years come from the Third World.  About 60 percent of them go on welfare, a much higher percentage than native-born Americans.

This is so Democrats get themselves more voters.  We have a more dependent society, we have people who want welfare.  And we cannot get the votes of a dependent society without changing our principles.... No, we offer hope, opportunity, and jobs.  And I hope that we offer a change to our absolutely suicidal immigration policies.

One reason you might like to view the speech yourself is to gauge the audience's reaction to her remarks on immigration in relation to that on other subjects she broached.  It seems to me that her immigration-sanity remarks garnered the most vocal approval, suggesting that the CPAC audience has quite a different orientation from the conference's organizers.

The content of Coulter's remarks and the reaction of her audience have possible significance well beyond that audience and VDARE.com's readership.  Senator Cruz had apparently been waiting in the wings and listening while Coulter was at the podium.  At 11:55 into his immediately-following keynote speech, he joked:

Boy, I do sure hope one of these days Ann Coulter will learn to speak her mind.  If we could get her to come out of that shell, I just have a feeling that she has some powerful things to say.

(Video for the first segment of Cruz's speech is here, and the third part is here.  I haven't found the middle part.)

Early in his Senate career, Cruz already looks to me to be a formidable package.  Unlike the wet-behind-the-ears freshman U.S. senator who was elected U.S. president in 2008, Cruz has a background that's a galaxy of accomplishments in both academic and public life.  This includes experience as a debater, which presumably explains why, in his half-hour CPAC appearance, Cruz spoke without notes or even a podium.

In Once Upon A Time in the West, Sergio Leone's culminating spaghetti Western, the character Cheyenne [Jason Robards] marvels over another major character, called only "Harmonica" [Charles Bronson], "He not only plays. He can shoot too."

With Cruz, it looks like he not only thinks and is unflappable.  Unusually for a conservative Republican, he can talk effectively, too!

So it can only be a good thing that Senator Cruz was there to hear Coulter dish out the central facts about our immigration madness and to hear the CPAC audience's enthusiastic reaction.