California Governor Arnold Schwarzenegger (shown campaigning with a stuffed burro on Olvera Street in Los Angeles) is following in the footsteps of his predecessor Jerry Brown, who famously recommended the canoe strategy for politicians, i.e. "paddle to the left, paddle to the right." 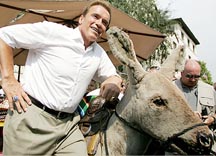 Just a month ago the governator repudiated his support for Prop 187, the 1994 initiative passed by 59% of voters which would have ended taxpayer-funded welfare for illegal aliens. Now he is pretending to support borders and immigration enforcement, like his statement of appeasement to Hispanic media never happened.

"We must ... strengthen our borders and reform our broken immigration system in a comprehensive way,'' Schwarzenegger said to an audience of 650 Republican activists at the state GOP convention.

While noting that America is a nation of immigrants, Schwarzenegger said "we are a nation of laws, and we will continue to insist that the federal government gets its act together, does its job, and secures our borders once and for all.'' [ Governor speaks to GOP right; San Francisco Chronicle, August 20, 2006]

"Comprehensive" is a curious word choice (reported by several sources) since its use normally indicates support for the massive amnesty the President and Senate want. It's odd he would use that term at all in front of a California Republican audience. Was he being arrogant or just having a pre-senior lapse? Your choice.