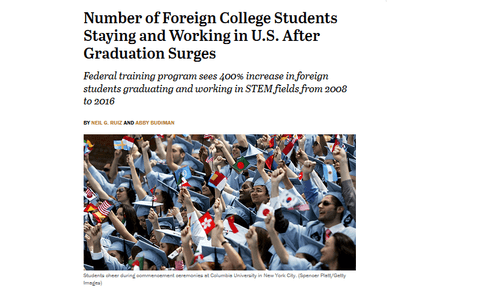 Breitbart reported on Wednesday: Job Gains for Foreign-Born Workers Outpace Native-Born Americans. No surprise there — the system is wired to benefit foreigners of questionable legality, from open borders to no universal e-verify.

Another doorway is through a college education: foreign students displace Americans on campus (which universities like for the full tuition), then the immigrants move straight into a US job, shafting young citizens twice over as one of the problems created.

Pew Research reported on a specific government program that has grown enormously in the last decade:

Number of Foreign College Students Staying and Working in U.S. After Graduation Surges, Pew Research, May 10, 2018

Between 2004 and 2016, nearly 1.5 million foreign graduates of U.S. colleges and universities obtained authorization to remain and work in the U.S. through the federal government’s Optional Practical Training program (OPT). More than half (53%) of the foreign graduates approved for employment specialized in science, technology, engineering and mathematics (STEM) fields, according to a Pew Research Center analysis of U.S. Immigration and Customs Enforcement (ICE) data received through a Freedom of Information Act request.

The sender nations benefiting from the wrong-headed program are not all positive toward US interests, to say the least. Pew’s map of home countries shows a gaggle of unfriendlies: 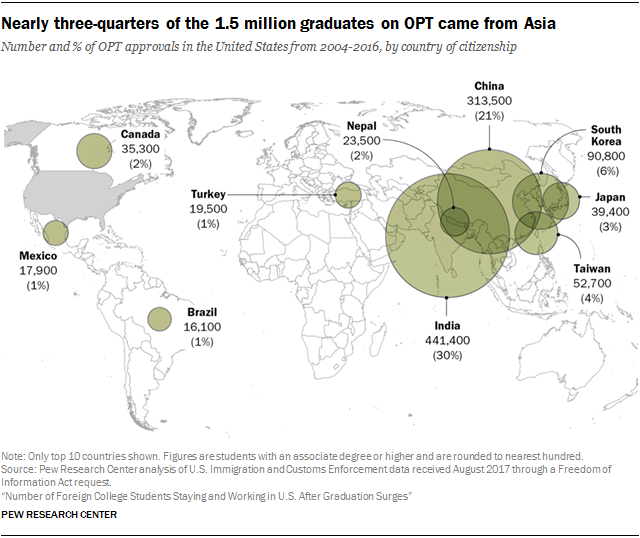 In particular, more than 300,000 students from Red China moving into American jobs is a red flag, when espionage is rampant and the Chinese are stealing US tech blind. The internet makes tech theft easier these days, but having live assets on the ground is still advantageous. Chinese spies range from students to employees and businesses. In 2007, Lou Dobbs reported on CNN: “Three thousand front companies we know of, Chinese front companies, trying to steal American industrial secrets, in addition to the effort to steal U.S. technology.”

It’s worse now, of course. During a February 13 hearing of the Senate Intelligence Committee, Senator Rubio asked the FBI director about “the counterintelligence risk posed to U.S. national security from Chinese students.”

Wray replied, “I think in this setting I would just say that the use of nontraditional collectors, especially in the academic setting, whether it’s professors, scientists, students, we see in almost every field office that the FBI has around the country. It’s not just in major cities. It’s in small ones as well. It’s across basically every discipline.”

Why does the government allow Chinese students to continue to infiltrate? It’s slow-motion war, and Red China is prevailing. Let American students take those jobs and college slots in tech — win-win.