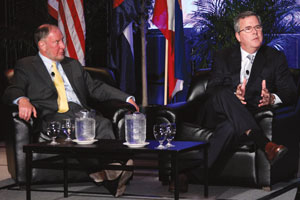 Last July, the ”odd couple” duo of Harvard sociologist Robert Putnam and retired Florida Governor Jeb Bush co-wrote an opinion piece for the Washington Post, condemning Americans for a lack of generosity toward immigrants and aliens (see my blog, An Independence Day Complaint-Fest from Elite Cosmopolitans). Now they are back with the message that mass amnesty is key to fulfilling foreigners’ American Dreams and encouraging assimilation to the values of this nation.

Professor Putnam researched the subject of community cohesion and didn’t like his findings indicating that ”diversity decreases trust” and delayed publishing his illiberal results as he tried to rejigger different conclusions. His solution reveals a non-traditional, liberal view of assimilation: ”What we shouldn’t do is to say that they [immigrants] should be more like us. We should construct a new us.”

Yet polls show Americans still prefer the values of this country to diversity and want new immigrants to adopt our culture and language.

In addition, you would never know from the elite duo’s remarks that American citizens are suffering the worst jobs depression since the 1930s.

Assimilation gets broad lip service these days (aside from Turkish Prime Minister Erdogan who calls it ”a crime against humanity”). Of course, the Raza apparachiks wants their tribe to retain Spanish and loyalty toward their home cultures. Standing on the Raza side is the Los Angeles Times, which recommends English language acquisition for economic reasons only, not as a route to traditional acculturation.

People who say they favor assimilation should condemn the many expensive crutches supplied by government to stymie the learning of English. Washington mandates that ballots be printed in foreign languages, even though the requirements of citizenship include knowledge of English. California law requires that taxpayers supply immigrants with free-to-them translators for medical treatment.

Business is just as bad, with their obnoxious Spanish signage and various multi-lingual services. I don’t know of any Hmongs in my town, but Wells-Fargo has that language on ATMs just in case. Spanish signs are all over the local hardware stores.

Putnam and Bush want mass amnesty, which is the absolute wrong policy for assimilation. Are they complete fools or just corrupted by diversity ideology?

The most effective, time-proven way to increase acculturation is to enact an immigration moratorium for a few decades (better yet, permanently). Stop the influx of millions of foreigners, and the gradual process of patriotic assimilation can be allowed to happen, as much as is possible today. A 2006 Zogby poll showed that two-thirds of Americans want less immigration so we can assimilate those already here. As usual, regular people understand basic human psychology in a way that elites don’t.

Referring to themselves as an ”odd couple,” Jeb Bush, former governor of Florida, and Robert Putnam, professor of public policy at Harvard University, came together during the Congress of Cities & Exposition to discuss an issue important to them both – immigrant integration in the United States.

”We both believe in this larger, angry debate … one crucial issue is largely ignored,” Putnam said. ”We have a lot of immigrants and we are not doing enough to integrate them into American life.”

Both men applauded NLC’s efforts on the issue, which include a call for Congress to act on comprehensive immigration legislation and the Municipal Action for Immigrant Integration project, which focuses on promoting civic engagement and naturalization among immigrant communities in cities throughout the United States.

”I hope Congress gets its act together and realizes it’s important to get this done. We need comprehensive immigration reform,” Bush said.

He added later, ”The dreams of immigrants become American dreams.”

Putnam offered an historical perspective, saying that there has always been turmoil and tension when it comes to integrating immigrant groups into American society.

The process has always been long but has also always been successful, according to Putnam. And while some aspects of integration are happening more rapidly than in the past, the country is doing less for immigrant integration than a generation ago.

Managing language and the acquisition of English is, and always has been, an important part of the process, he said.

”I think one thing we can all agree on is that language is the key to integration,” Putnam said.

Bush agreed, calling for a focus on family literacy, as well as a greater role for civics in schools.

He also cautioned against ”lowering the bar” for immigrant children in schools.

”High expectations are important,” he said. ”There is no need to tell them to work hard. That is why they are here.”

Bush said one of the great success stories of American history is the nation’s ability to absorb people from all walks of life to pursue their dreams.

This is also an economic issue, Bush said. The country needs to grow the population to have young, dynamic people to be the workers of the future.

During a question-and-answer session, Putnam and Bush agreed that local leaders are an important part of the immigrant integration process.

Putnam said research shows that the leadership of elected officials in a community contributed to successful integration.

When asked how to change the paradigm from exclusion to inclusion, Bush said it’s an economic necessity – a high-growth economy ”requires that we solve this issue.”

”The fact is immigrants are aspirational,” Bush said. ”They came here to add to their lives because they couldn’t do it where they lived. Policies need to get in line with that.”

Putnam said the payoffs for inclusion are huge and called for funding for English training.

”Mayors and local leaders should not think of themselves as alone on this issue,” he said, saying that a number of groups, including churches, are already doing important work on integration and inclusion of immigrants.

Both Bush and Putnam said they oppose the Arizona immigration law, citing how their own children or grandchildren could be targeted because of their background and how they look.

They also agreed that deporting illegal immigrants from across the country would cost billions and not be very effective.