"On Top Of That, He Used To Beat The Snot Out Of Her On A Regular Basis"—Unfired Wife-Beaters And Drug Abusers In The Clinton White House

There's been a lot of talk about (a) domestic abuse (a guy was fired from the White House because his ex-wife said he hit her when they were married) and (b)security clearances, which not all Trump administration staffers have received from the FBI.

The failure to fire Rob Porter earlier and the constant churn within the White House are indicative of a central moral failing, and a conundrum facing all of the President’s staff — how do you ethically serve a deeply unethical man?

The answer to Adam Schiff's question will have to come from former Clinton Administration staffers.

Time for a blast from the past—retired FBI  agent Gary Aldrich worked in the White House during the Bush (senior) and Clinton administrations, doing background checks on the staff,  and published a book called Unlimited Access: An FBI Agent Inside The Clinton White House in 1996. This is from pp. 117-118 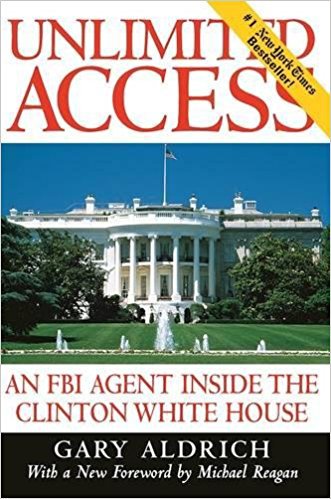 A second example, whom I'll call Balls O'Leary, another composite, will serve to illustrate another well-represented type of Clinton staffer.

Balls was a middle-aged guy who had graduated from college in the early 1970s, and then basically "hung out," as he put it, for about a decade. Then he took a job on the Hill in one of the more liberal House or Senate committees, or maybe he worked for a public interest group, an environmental law firm, or a women's rights group.

Balls came up to my office. In the course of the interview, I asked him about an arrest in the 1970s for possession of an illegal substance. He said, "You know, man, that 'longhairs' like me got rousted all the time."

"Yeah. That's it. You know, man, you cops didn't like people with long hair in those days."

"Well," I thought, "I guess he's got me there." It's true; as a young FBI agent, I really didn't like guys with long hair because they were usually the violent felons I was trying to track down. And a lot of them smelled bad.

“But what about your arrest? Tell me about it."

He explained that he was pulled over by a redneck cop (in a Northern state—how was that possible?), and the cop pulled him over only because he had long hair. And then the cop made an illegal search of his car and found (of course!) somebody else's marijuana. He was arrested, and the cop did not advise him of his rights! Can you imagine that?

So there it was. I wrote it all down and sent it in to my headquarters. At about the same time, an agent was interviewing O'Leary's ex-wife about this "victim of police brutality." She had quite a different story. According to her. Balls was really a "head," a serious user of any and all kinds of drugs. On top of that, he was an alcoholic. On top of that, he used to beat the snot out of her on a regular basis. Others we interviewed echoed his ex-wife's claims.

I received these additional reports and, I admit, I wasn't surprised by what I read. After more than twenty years in the FBI, I was pretty good at sizing people up, and I knew that Balls had more strikes against him than just long hair. I called him up and told him to come to my office immediately. He meekly complied.

He came in and sat down. "What's up? What's wrong?" Nothing much, just lying to an FBI agent, which is a federal felony, for openers. I began, "Look, ah, we have some real problems with what you told me last time, Balls. We've talked to quite a number of your former associates. They claim you had a real history of substance abuse and that you were an alcoholic. Did you use marijuana on a regular basis? Did you use cocaine, LSD, mushrooms, speed, whatever you could get your hands on, as these former friends of yours have claimed?"

Balls was red-faced. "I cannot believe this. This is so, so, so kafkaesque!"

Nevertheless, I was able to extract the required confession out of Balls without electrodes or rubber hoses, but by that point, I was pretty sure that he would be at the White House on the day that I retired anyway. You know what? He was.

The White House staff did meet some standards. They met the standards that the Clintons set. If those standards were low, if they reflected the morality of the counterculture, then the Clintons are the only ones who can be blamed.

Italics are Aldrich's, bold-face is mine. If we're supposed to believe this guy Porter's ex-wife, can we also believe that Bill Clinton exposed himself to employee Paula Jones, groped Kathleen Willey, and raped Juanita Broadrick?

And as far as domestic abuse is concerned, no one has ever accused Bill of beating Hillary, but there were reports—denied by the Clintons—that on at least  one occasion, First Lady Hillary Clinton tried to hit Bill with a White House lamp.