On Missing Foreign Student Story, Americans Recognize That Mass Immigration Is Bad For Our Country 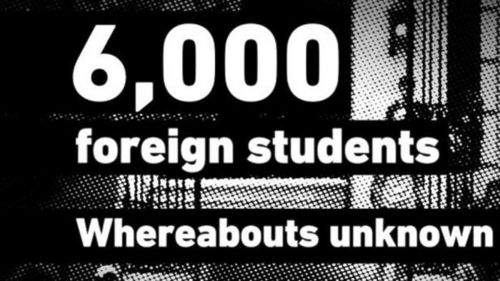 VDARE.com's Brenda Walker has just pointed us to an ABC News piece (Lost in America: Visa Program Struggles to Track Missing Foreign Students, by Brian Ross and Matthew Mosk, September 2, 2014) on thousands of putative foreign students—they're foreign all right, but just putatively students, as the ABC piece makes clear—who have gone missing in our country's interior.

The ABC article is information-packed and well worth reading, although if you're prone to grinding your teeth, you might want to pass on this one.

And it's attracted lots of online comments from readers,  about 1,270 as I write this at 12:05 a.m. Eastern Time on September 3.  Other readers can give votes of approval—"up" votes—to comments.  (It's also possible to down-vote a comment, but tallies of down votes aren't displayed at this site.)

Comments that we might call "VDARE.com compatible" are frequent among the ones that stay on topic.  (There's a long sub-thread of people arguing about diets.  Go figure.)  And they get approving votes.

It turns out to be interesting to compare the up votes on three such comments that were all posted roughly 16 hours ago.

Here's one by "My Cold Dead Hand":

How many more 9/11's do we need before we take this threat seriously? How about we simplify the tax code and then use all the resource savings to protect our borders?

Someone with the moniker "ustateach09" wrote:

We are so screwed up! We are handing ourselves over to foreigners. We need to tighten up or we'll not be AMERICA ANYMORE!

That was good for 42 up votes.

But of all the comments I viewed, this one by "3 Wise Men" has the best combination of VDARE.com-style specificity and opinion:

Shut down everything. No immigration, no work visas, no student visas, no nothing until we can get a handle on this problem.

We can't find the ones that are here already why let more in?

And it's attracted 630 up votes, with the count still incrementing!

Once again (see here for an earlier commentary), it appears that—unscientifically-speaking—a large fraction of our fellow citizens recognize that mass immigration is bad for our country.

They need to stand up and be visible.  As do well-informed VDARE.com readers, in letters-to-the-editor, op-eds, townhalls, and call-ins to talk-radio shows—and comment threads!