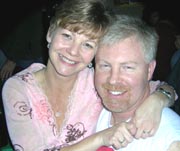 Jim and Margie Rook were killed on June 24 of 2006. The Ohio couple had nearly reached their vacation destination of Destin, Florida, when their car was struck head-on by a truck driven by a drunk illegal alien, Jesus Bernard.

Just as his trial was about to begin a few days ago, he agreed to a plea deal that will give him a prison sentence of 38-55 years. The family was relieved because it meant the couple's teenage daughter Kylie and adult son Chris wouldn't have to testify.

Bernal pleaded no contest Monday to three counts of DUI manslaughter and two counts of DUI with serious bodily injury. He will be sentenced for the crimes Oct. 18. Prosecutor Ryan Love said he was surprised by the plea, which came on the day a jury was to be selected to try Bernal. ”We were not making any (deal) offers to him,” Love said. James Rook, 43, of Cincinnati, Ohio, and his wife, Margie, 41, died June 24, 2006, when Bernal’s truck collided head-on with their car on U.S. Highway 331 in Walton County. (See news clip version of the story.) [ Man pleads no contest to three counts of DUI manslaughter Northwest Florida Daily News 9/17/07]

Jim and Margie were well known in the town of Blue Ash, a suburb of Cincinnati. Jim co-founded the band the Fast Forward (his "other family") and had played drums and sang with the group for 23 years. The band has a memorial page as part of its website which makes clear that the couple was fun-loving, warm-hearted and had many friends. Jim's day job was as a surgical tech at Deaconess Hospital in Cincinnati.

Kylie, 14, was in her parents' car at the time of the accident and received minor injuries. She moved in with her aunt and uncle after the crash and was at least able to continue attending the same school and live close to her old neighborhood. Chris has begun a lawncare business and plays in the band Langus. But they face the rest of their lives without the loving presence of their parents because Washington prefers open borders over national sovereignty.