The administration never misses an opportunity to send loving regards to its illegal alien base. A recent example was the use of a Colombian immigrant named Adriana on the front page of the failed ObamaCare website. The White House could have chosen an American citizen to be the welcoming image of its signature public policy effort, but it didn’t. In picking a foreigner (albeit a legal one), the administration may be sending a subtle message that O-care will eventually be available to diverse illegal aliens.

Below, the smiling face of immigrant Adriana invites the American public to join the ObamaCare system. 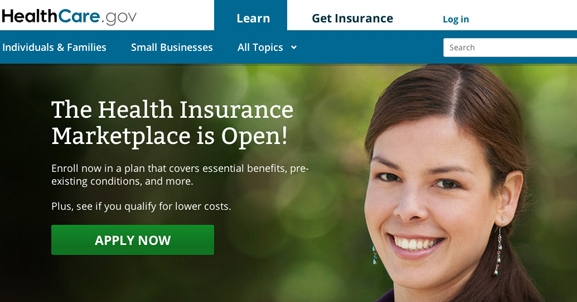 Much of the press played the story of Adriana as a victim of meanie online thugs, which is more play on the increasingly tiresome bullying meme, a favorite cause of the liberal media to show its social responsibility.

The mystery woman who became the face of the most criticized website in America, designed for Obama’s health care law, says she is the victim of cyber bullying and the object of harsh public criticism over ‘Obamacare.’ [. . .]

People have speculated about Adriana’s immigration status since undocumented immigrants are not eligible for the health care program. Adriana said she is a permanent U.S. resident and has been married to a U.S. citizen for six-and-a-half years. Together, they live in Maryland with their 21-month-old son.

Ann Coulter opined that Obama could have hired an American but instead exploited an immigrant (who was paid nothing for her image).