[Gergen] learned the importance of saying the same thing, over and over and over: "Nixon taught us about the art of repetition. He used to tell me, 'About the time you are writing a line that you have written so often that you want to throw up, that is the first time the American people will hear it.'" 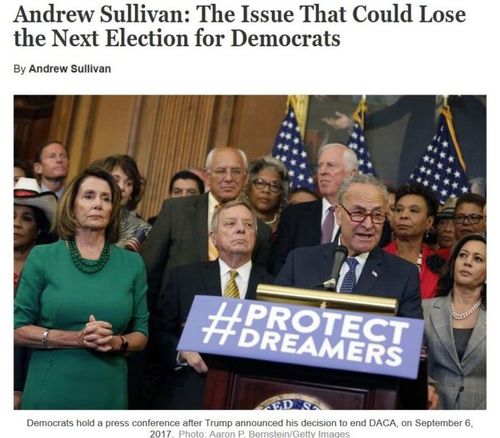 My point?  Well, a few days ago, Andrew Sullivan demonstrated that—at least when it comes to immigration—even big-shot, plugged-in commentators need to have basic facts pounded into their heads a nauseating number of times.  Posting at New York Magazine (The Issue That Could Lose the Next Election for Democrats, October 20, 2017—a piece already highlighted here by Steve Sailer, for other reasons), Sullivan wrote:

[Vox reporter Dara] Lind is right about the perverse politics of Obama’s centrism. He ramped up enforcement on the border and deportations … only to get nothing from the GOP in return.

!@*#@#&^$^!!**!&&^%$!!!  It's now nearly three-and-a-half years since someone in the legacy media published an article that exploded this ramping-up-enforcement lie.  Here's Brian Bennett in the Los Angeles Times on April 1, 2014 (first four paragraphs):

Immigration activists have sharply criticized President Obama for a rising volume of deportations, labeling him the "deporter in chief" and staging large protests that have harmed his standing with some Latinos, a key group of voters for Democrats.

But the portrait of a steadily increasing number of deportations rests on statistics that conceal almost as much as they disclose. A closer examination shows that immigrants living illegally in most of the continental U.S. are less likely to be deported today than before Obama came to office, according to immigration data.

Expulsions of people who are settled and working in the United States have fallen steadily since his first year in office, and are down more than 40% since 2009.

On the other side of the ledger, the number of people deported at or near the border has gone up — primarily as a result of changing who gets counted in the U.S. Immigration and Customs Enforcement agency's deportation statistics. 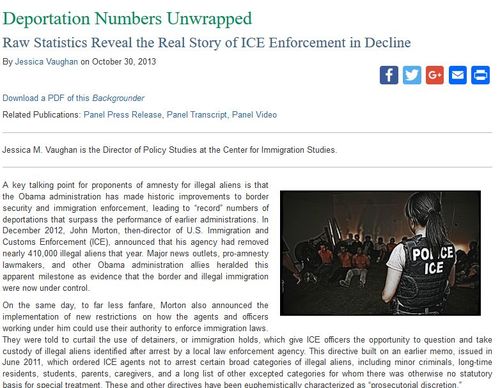 For the definitive work on this point, please refer to the October 2013 [!!!] backgrounder Deportation Numbers Unwrapped: Raw Statistics Reveal the Real Story of ICE Enforcement in Decline [PDF] by Jessica Vaughan of the Center for Immigration Studies.  Here are her two concluding paragraphs:

The Obama administration has sought to portray its performance on immigration enforcement as smarter, better, and more successful than previous administrations. To support this claim, it has presented a few statistical nuggets in clever packaging that have been artificially padded by transferring cases from the Border Patrol to ICE.To use the proverbial “apples and oranges” analogy, the Obama administration, in order to give the impression of a “record” apple harvest, has counted both apples (ICE cases) and oranges painted to look like apples (Border Patrol cases), while leaving a large number of actual apples on the trees.

A better picture of the true state of immigration enforcement in the interior, where most illegal aliens have settled and where most Americans notice the impact, emerges from this analysis of ICE’s internal statistics and metrics. Interior enforcement activity, including arrests and removals of criminal aliens, which are ICE’s highest priority, has declined significantly. More than 870,000 aliens who have been ordered removed are still living here in defiance of our laws. This dysfunction must be addressed before consideration of more mass amnesties or expansions in admissions of any kind. Until we achieve better control of illegal immigration, and the laws we have are taken seriously and enforced, there is no point in passing new ones.

And to Ms. Vaughan's point about the futility of passing new laws, we can compare Andrew Sullivan's other potent bit of policy-foolishness in his current article:

The GOP base spent the last few years resisting any measure that could balance tougher border security and law enforcement with a path to citizenship.

On this topic, the response to Sullivan is effectively contained in a message I sent a few days ago to Attorney General Jeff Sessions via the Department of Justice's web portal

I’m angry about the ceaseless threats to give lifetime work permits for the DACA illegal aliens in return for some meaningless promises of future enforcement.

Let's review the bidding: In 1986, we did an amnesty that was supposed to fix the problem and, thus, was never to be repeated.  It was expected to legalize about a million illegal aliens.  Turned out to be 2.7 million, and fraud was enormous, especially in the Special Agricultural Worker component that Chuck Schumer cooked up.

Since then, Congress has passed six more mass amnesties, aggregating to another 3 million illegals getting their status laundered to legal.  (Plus, there's a steady drip, drip, drip of individual illegals getting legal status via marriage to citizens and green-card holders ... and similar maneuvers.  This is surely in the hundreds of thousands.)

Yet we now have somewhere between 10 and 20 million illegals in the country, waaaaaay more than when we started.

SO WHY WOULD WE DO IT AGAIN???

Further, we don’t owe these DACA-ites **anything**.  They’re already into us taxpayers for **easily** half a trillion dollars for education and other public services.  According to USCIS, 80 percent are Mexican. [PDF]  Let’s just give ‘em each a bottle of water and a bologna sandwich and put ‘em on the first bus south.

Congress itself is like a bad penny when it comes to illegal aliens and amnesty.  Members have learned nothing, even from Trump’s election, which was essentially about making immigration serve citizens’ interests, not those of unpatriotic businesses and grievance-mongering organizations.

[Links added; thanks to the late, lamented Terry Anderson for the "bottle of water and bologna sandwich" cure for illegal immigration]

Further, Dale Wilcox of the Immigration Reform Law Institute [IRLI] recently presented a history of amnesty's futility that goes back to well before the initial Congress-passed abomination of 1986; see his DACA Aliens Should 'Dream' To Return And Reform [September 14, 2017].

Please bone up on this subject because, as it looks now and as Nixon likely would have told us, we'll have to go door-to-door nationwide yammering at them before the American people will, finally, hear these facts.  So we're going to need lots of informed troops.