On Black Friday, when American citizens were urged by business and government alike to spend big for the holidays, the President spent some special time with open-borders enthusiasts fasting for amnesty in massive tents on the National Mall.

Below, Obama met with Eliseo Medina, SEIU boss, and other alleged hunger strikers who were all dressed in matching brown hoodies. 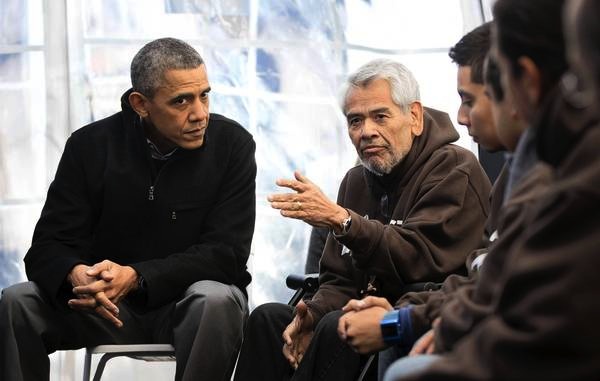 Remember that this administration has been generous to the cause of rewarding foreign lawbreakers in the use of federal park land. During the government shutdown in October, the open-air WWII monument on the National Mall was closed to veterans but open for an elaborate immigration rally with speakers and live music.

The current soirée has been quite the social magnet for Democrats. The visitors to the hunger tent have included Vice President Joe Biden, Secretary of Agriculture Tom Vilsack, Secretary of Labor Tom Perez, chief of staff Denis McDonough, Director of the Domestic Policy Council Cecilia Muñoz and Senior Adviser Valerie Jarrett.

In addition, Kathleen Kennedy Townsend, the daughter of RFK, dropped by to add that unique Kennedy amnesty mystique. “There is a moral quality to what kind of country we are,” she said after meeting with the dieters.

Right, that would be the Kennedy version of morality where lawbreaking foreigners are imported in the millions to displace honest Americans from their jobs, all in the cause of creating a permanent Democrat majority.

WASHINGTON (AP) — President Barack Obama on Friday told activists who are fasting to protest House inaction on immigration legislation that their “commitment to change” ultimately will help pressure lawmakers to act.

On the day after the U.S. holiday of Thanksgiving marked by an abundance of food, Obama stopped in at a heated, white tent on the National Mall where some activists have drunk only water since Nov. 12 in support of immigration legislation.

Obama mentioned the activists in an immigration speech in San Francisco earlier this week. He delivered his message in person on Friday, accompanied by first lady Michelle Obama.

“I want everybody to know I remain optimistic that we’re going to get this done,” he said, according to video of his remarks. He said passage of an immigration bill was “more a question of when than if.”

“But I’d rather get this done sooner rather than later,” Obama said.

The White House issued a statement after the approximately 40-minute visit that said Obama thanked the hunger strikers “for their sacrifice and dedication and told them that the country is behind them on immigration reform.”

Organizers of the fast said Obama expressed concern for the health of the hunger strikers, and held the shoe of an immigrant who died in the Arizona desert while trying to enter the U.S.

House Speaker John Boehner, R-Ohio, has refused to schedule a vote on a comprehensive immigration measure the Senate passed this summer. The House prefers a piecemeal approach, but Boehner hasn’t said whether lawmakers will consider any bills this year or whether the issue will slip into next year, when midterm-election politics will make legislative action less likely.

The House has moved too slowly to satisfy immigration advocates, including those on the hunger strike as well as a man who shouted during Obama’s speech in California for the president to stop separating families by deporting people who are living in the country illegally.