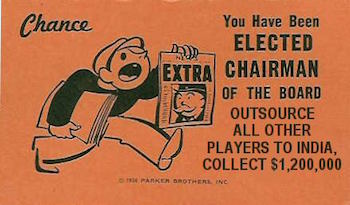 Economic observer Lou Dobbs was bemused to see the President visit the Nike corporate HQ in Oregon on Friday to campaign for his Trans-Pacific Partnership trade scheme. Factually, Nike reaps huge profits from having moved its production of athletic merchandise out of America to offshore factories and is therefore an example of how millions of jobs have been lost in this country. Nevertheless, the President thought the event at Nike would somehow make a nice narrative about the desirability of the TPP trade deal despite having chosen an example that shows the failure of global economics for the citizens.

DOBBS: Curiously, Mr. Obama chose to go to Beaverton Oregon because some genius in his administration decided that Nike headquarters one of the nation’s largest manufacturing offshorers and outsourcers of American jobs would be the perfect place to promote the benefits of the controversial trade deal, known as the Trans-Pacific Partnership. . .

But Nike is an emblem of why critics of the TPP say that trade deal will cut more American jobs and further reduce American wages. Trying to boost the President and his trade deal, Nike today pledged to create 10,000 jobs in this country over the next decade under the Trans-Pacific Partnership. That is really tepid stuff because Nike employs 26,000 workers in the US. Yet its contract factories overseas have more than one million workers, nearly all of them in Asia.

Part of Nike’s original value proposition was founder Phil Knight’s view that it could manufacture shoes at a lower cost by outsourcing jobs and offshoring production. As for labor conditions, Nike found that a third of its contract manufacturers in the year 2013 didn’t meet the company’s minimum standards, hours and wages the main problems. Yet President Obama is holding up Nike as an exemplar of why Congress should grant him fast track trade approval. . .

Regrettably, our President seems to truly believe he can ignore the consequences of this trade deal, and is his habit, simply acknowledges he has no rationale for doing what he does, just because he thinks it is best. He has no answer for why he is at the headquarter of a company with a million contract employees overseas, $6.5 billion parked in overseas bank accounts and only 26,000 workers in this country. . .

But I am glad he went to Nike headquarters to illuminate the immense threat to our working men and women, our small businesses and our middle class, all of which have been the targets of such disastrous trade deals for decades.

The latest trade deal has an extra item in that it contains the possibility of increased immigration along with the usual jobs loss from outsourcing. So the administration has really outdone itself in creativity in the destruction of America in this effort.

At Nike headquarters, Obama says ‘just do it’ on free trade, Washington Times, May 8, 2015

Pitching a free-trade deal with Asia at the headquarters of Nike, President Obama said Friday that Democrats who oppose the agreement are “just wrong.”

“On this issue, on trade, I actually think some of my dearest friends are wrong,” Mr. Obama said. “They’re just wrong. On every progressive issue, they’re right there with me, but on this one, they’re like, whooping on me.”

Mr. Obama visited the Nike campus in Beaverton, Oregon, to promote the Trans-Pacific Partnership, a sprawling free-trade deal with 11 other Pacific rim countries. Many Democratic lawmakers oppose granting Mr. Obama trade-promotion authority, which would require Congress to vote up or down on the agreement without amending it.

The Senate is expected to take up the legislation next week.

The president, acknowledging that the North American Free Trade Agreement of the 1990s led to job losses in the U.S., said the TPP is “a different kind of trade deal” because it contains “strong, enforceable provisions” for protecting workers and the environment.

But Public Citizen, a consumer advocacy group that opposes the TPP, said the agreement contains “the same failed standards as those in President Bush’s last trade agreements, not new or unprecedented.”

The president also touted the announcement Friday by Nike CEO Mark Parker that the company will create up to 10,000 jobs in the U.S. over the next decade if TPP is ratified.

“This deal would be a good thing. So let’s just do it,” said Mr. Obama, quoting the company’s signature slogan.

Lori Wallach, director of Public Citizen’s global trade watch, said the promise of Nike to create 10,000 jobs over 10 years “pales” in comparison with the company slashing 5,500 jobs in the U.S. last year alone.

Mr. Obama said Democrats and their union allies are understandably wary of the impact of free-trade agreements such as NAFTA.

“I know a lot of folks are skeptical about trade,” he said. “Some of our manufacturing base shifted over the last 25 years. There was real displacement and real pain. For many Americans, this is not an abstraction. But we’ve got to learn the right lessons from that. If any agreement undercuts working families, I won’t sign it.”

The head of the progressive advocacy group Democracy for America blasted Mr. Obama’s “shilling” for the free-trade deal.

“The only thing weaker than sweatshop-king Nike’s empty promises is the White House’s willingness to hype them as a victory in its push for a trade deal that will make it easier for other huge corporations to ship more U.S. jobs overseas, sell tainted food products in our supermarkets, and challenge our laws in foreign tribunals,” DFA Executive Director Charles Chamberlain said.

And the AFL-CIO said Nike’s promise of job creation “should not be contingent on a possible trade deal.”

“We have heard similar promises from companies before, and very few have panned out,” said spokesman Eric Hauser. “We hope this time is different. Decades of experience have taught us that corporate-driven trade policy too often accelerates a global race to the bottom.”