Obama Must Be “Billy Elliot”, Because When Joe The Plumber Compared Him To Sammy Davis, Jr. It Was Racist 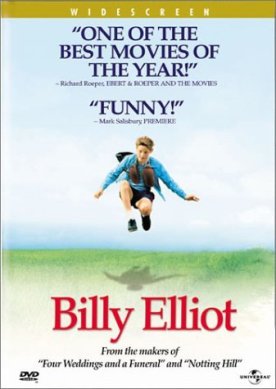 Via Kathy Shaidle, I see that Stephen Colbert was mocking Hugh Hewitt for comparing the victory in Wisconsin to Margaret Thatcher's victory over the British Unions:

Hewitt:[On Hannity] It’s a precursor election, 1979, Maggie Thatcher swept into power in England, took on the unions, and what followed? Ronald Reagan. I think this is only five months, but I think five months from now, we’ll see, as Reagan followed Thatcher, Mitt Romney will follow Scott Walker.

Colbert: [Listening to clip of this] Exactly. Wisconsin is England, Scott Walker is Margaret Thatcher, the public school teachers are the British mining unions, which makes Barack Obama Billy Elliott. Oh, no. No.

Hewitt: [Listening to clip of Colbert reacting to earlier clip] Mark Steyn, what do you think? Barack Obama is Billy Elliott?

Billy Elliot is the "eponymous hero" of a movie of the same name, (set during the Thatcher years) about a 12 year-old boy in a British  coal-mining town in England who wants to be a dancer.

And all I can say is that Obama must be Billy Elliot, because when Joe The Plumber "told Katie Couric that Obama's rhetorical tap dance was "almost as good as Sammy Davis, Jr.,"  it was  widely regarded as racist.[The Left Declares War On Joe the Plumber, By Michelle Malkin, October 16, 2008 ]