On Tuesday, the President holds his sixth White House Iftar dinner, in celebration of the Islamic holiday of Ramadan, in which Muslims fast all day and then have a big meal after sundown. (Weight gain, upset stomachs resulting from gluttony and general grumpiness are commonly associated problems with a month of fasting/feasting.)

Obama used the occasion to advance his fable that Islam has been a part of America since the nation’s beginning by displaying Thomas Jefferson’s copy of the Koran for guests to ogle.

Below, Jefferson’s Koran was an English translation so it cannot be called a true or “Holy Koran” according to Islamic law. 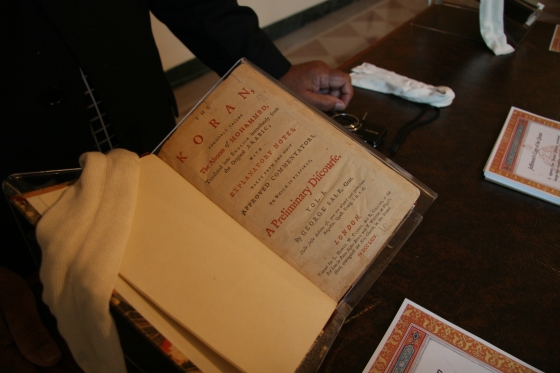 The President has been spinning this fiction for years, since at least his 2009 Cairo speech, which he envisioned as ending the historic animosity between Muslims and everyone else through his magical persuasive powers. (See my observations from the time, “Obama In Egypt: Multiculturalist Meets Muslims. Muslims Win.”)

Remarks by the President on a New Beginning, Cairo University, June 4, 2009

I also know that Islam has always been a part of America’s story. The first nation to recognize my country was Morocco. In signing the Treaty of Tripoli in 1796, our second President, John Adams, wrote, “The United States has in itself no character of enmity against the laws, religion or tranquility of Muslims.” And since our founding, American Muslims have enriched the United States. They have fought in our wars, they have served in our government, they have stood for civil rights, they have started businesses, they have taught at our universities, they’ve excelled in our sports arenas, they’ve won Nobel Prizes, built our tallest building, and lit the Olympic Torch. And when the first Muslim American was recently elected to Congress, he took the oath to defend our Constitution using the same Holy Koran that one of our Founding Fathers — Thomas Jefferson — kept in his personal library. (Applause.)

Is any of that list true? Other than Keith Ellison’s taking the oath on Jefferson’s Koran, the veracity of the flummery is doubtful.

As any good Stalinist knows, rewriting to bring the multicultural future means rewriting the past to include Muslims in America’s history, even though Muslims are a recent addition to the diversity of the nation. So Barack Hussein Obama comes up with the ridiculous statement that “if you actually took the number of Muslim Americans, we’d be one of the largest Muslim countries in the world,” as he did in 2009. In fact, America is a large country that has a small population of Muslims.

The Jefferson Koran is part of the Presidential propaganda effort, but of course Jefferson was not an enthusiast of Islamic ideas. He was a man of far-reaching interests, from the natural history gleaned in his Lewis and Clark expedition to the religious beliefs of America’s enemies useful in pursuing the Barbary War. President Jefferson went to war against the Muslim Barbary States of North Africa because of their piracy against American ships, including the enslavement of crews.

Like other founders, Jefferson had a low regard for Islam, and he most certainly did not host an iftar dinner in the White House, as Obama has repeatedly asserted. A Tunisian temporary envoy (not an ambassador as is often stated) came to a normal dinner at the White House, which had been rescheduled for a later hour for religious reasons at the guest’s request.

Following is the official White House report of the recent iftar event, as if Islam were the most normal thing in the world, while Christians and other religious minorities are being chased out of the Middle East by Muslims according to the directives of the Koran.

Last night, President Obama hosted his sixth Iftar dinner celebrating Ramadan at the White House, an annual tradition started by First Lady Hillary Clinton when she hosted a Ramadan Eid celebration dinner in 1996. Many consider President Thomas Jefferson to be the first President to host an Iftar dinner, as he hosted a sunset dinner to accommodate the fasts of an envoy from Tunisia over 200 years ago.

The Iftar is the meal after sunset that concludes the day of fasting during the month of Ramadan, a time to pray and reflect, to be reminded that we are equals in humanity, and to reaffirm commitments to helping the less fortunate, including those struggling from economic hardship and inequality.

Last night, guests were welcomed into the East Wing where a copy of the Quran owned by President Thomas Jefferson, one of the founding fathers of the United States, was on display from the Library of Congress. At sunset, guests gathered in the Grand Foyer to break their fast with a date following the traditional melodic Muslim call to prayer led by a local student from the University of Maryland. Then finally, after a 16-hour day of fasting since sunrise, guests gathered in the State Dining Room for a halal meal with the President.

Among attendees were members of the diplomatic corps, White House administration officials, U.S. Government staff, elected officials, and Muslim Americans who have been doing great work to strengthen the fabric and prosperity of our nation. This year’s Iftar celebrated Muslim Americans working tirelessly to fight income inequality by creating opportunities for access, whether through education, health, food security, or at-risk youth development.

Among those at the President’s table was Kelly Carlisle, a former member of the Navy who leads an urban farming program where at-risk children grow and sell fresh food to eat healthier and deposit the profits they earn into individual savings accounts to build toward a better future.

Aala Muhammed’s parents emigrated from Sudan and worked several jobs to send her to a good high school in Chicago, but her hopes of going to college faced financial challenges. With the help of a nonprofit that focuses on young people, she earned admissions to Yale University and now runs her own program to encourage girls of color to pursue science, technology, engineering, and mathematics (STEM) education.

Also seated with the President was Muhammed Chaudhry, who runs a foundation that works with schools, parents, and local IT startups to better prepare students to embrace science and math and find creative ways to keep academic enrichment programs going for low-income students in the face of summer program budget cuts.

During his remarks, the President thanked the Muslim community for the contributions they’ve made to create opportunities for those who lack access. No matter our faith, race or gender, we are equals in humanity.

“Tonight we reaffirm a simple truth. Fundamental to the character of our country is our freedom of religion — the right to practice our faith as we choose, to change our faith if we choose, or to practice no faith at all and to do all this free from fear of. All of us are deserving of an equal opportunity to thrive — no matter who we are, what we look like, what we believe, or how we pray. And all of us have an obligation to do our part — to help others overcome barriers, to reverse the injustice of inequality and to help more of our fellow citizens share in the promise of America.

In Islam, there is a hadith that says God helps the servant as long as the servant helps his brother. In other words, we’re summoned to serve and lift up one another, and that’s the lesson of several of our guests here tonight.”

President Obama also wished Muslim Americans and Muslims all around the world a blessed Ramadan.