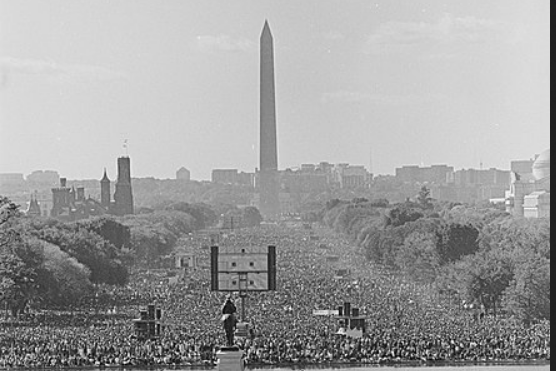 In a long article on the young Barack Obama in the Chicago Reader, December 8, 1995, as he was launching his political career, I found something I had not known before:

"If [black] nationalism could create a strong and effective insularity, deliver on its promise of self-respect, then the hurt it might cause well-meaning whites, or the inner turmoil it caused people like me, would be of little consequence."

What Obama wants instead is multicultural collective action. He told the Reader in 1995:

"In America," Obama says, "we have this strong bias toward individual action. You know, we idolize the John Wayne hero who comes in to correct things with both guns blazing. But individual actions, individual dreams, are not sufficient. We must unite in collective action, build collective institutions and organizations." ...

"But what was lacking among march organizers was a positive agenda, a coherent agenda for change. Without this agenda a lot of this energy is going to dissipate. Just as holding hands and singing 'We shall overcome' is not going to do it, exhorting youth to have pride in their race, give up drugs and crime, is not going to do it if we can't find jobs and futures for the 50 percent of black youth who are unemployed, underemployed, and full of bitterness and rage. ...

"Exhortations are not enough, nor are the notions that we can create a black economy within America that is hermetically sealed from the rest of the economy and seriously tackle the major issues confronting us," Obama said.

"Any solution to our unemployment catastrophe must arise from us working creatively within a multicultural, interdependent, and international economy. Any African-Americans who are only talking about racism as a barrier to our success are seriously misled if they don't also come to grips with the larger economic forces that are creating economic insecurity for all workers—whites, Latinos, and Asians.

And don't forget, it takes a village to raise a child!

"The right wing, the Christian right, has done a good job of building these organizations of accountability, much better than the left or progressive forces have. But it's always easier to organize around intolerance, narrow-mindedness, and false nostalgia. And they also have hijacked the higher moral ground with this language of family values and moral responsibility.

"Now we have to take this same language—these same values that are encouraged within our families—of looking out for one another, of sharing, of sacrificing for each other—and apply them to a larger society. Let's talk about creating a society, not just individual families, based on these values. Right now we have a society that talks about the irresponsibility of teens getting pregnant, not the irresponsibility of a society that fails to educate them to aspire for more."

Interestingly, while Obama is for the workers of the world uniting politically like in a Benetton ad, he's not crazy about blacks deciding for themselves to live among whites:

"The right wing talks about this but they keep appealing to that old individualistic bootstrap myth: get a job, get rich, and get out. Instead of investing in our neighborhoods, that's what has always happened. Our goal must be to help people get a sense of building something larger. ...

Obama's 1995 dismissal of getting a job, getting rich, and getting out of the ghetto was a reflection of his first conversation with Rev. Dr. Jeremiah A. Wright, Jr. in the 1980s, as recounted in Dreams from My Father. One of Wright's own secretaries at Trinity tells Obama she wants to move to an integrated suburb so her son will be safe. Obama then asks Wright (pp. 283-284):

"But wasn't there a reality to the class divisions, I wondered? I mentioned the conversation I had with his assistant, the tendency of those with means to move out of the line of fire. ...

"'I've given Tracy my opinion about moving out of the city, [Rev. Dr. Wright] aid quietly. 'That boy of hers is gonna get out there and won't have a clue about where, or who, he is."

"'It's tough to take chances with your child's safety.'

"'Life's not safe for a black man in this country, Barack. Never has been. Probably never will be.'"

The economic subtext is that the jobs of both Wright as a South Side black preacher and Obama as a South Side black community organizer and proto-politician are imperiled by the right of blacks who can afford it to move out of the black slums and find a less dangerous place to raise their children. It's less fun being a "community leader" if your putative followers keep moving to Schaumburg. So, Wright and Obama implore their followers to stay put, even at the risk that their children will join gangs and go to prison or the grave.

So these two hyper-glib men's guilty consciences over their policy of self-interestedly persuading black parents to continue to expose their children to the dangers of gang-infested neighborhoods helps explain some of the anti-white paranoia that runs through Wright's and Michelle Obama's statements. For example, on 60 Minutes, Michelle explained: "... as a black man, you know, Barack can get shot going to the gas station ..." as if KKK snipers were cruising past the South Kenwood Amoco. (South Kenwood, where the Obama's mansion is, is only 1/3rd black, but North Kenwood's a dicey neighborhood).

Obviously, the main danger faced by black men is being shot by other black men, but that's too unspeakable to mention, so free rein is given to paranoid fantasies about The Man being behind black-on-black violence, as in Wright's Trinity church "Black Value System." Keep in mind that this quote isn't from Farrakhan, it's from the church that the Obama family donated $22,500 to in 2006:

Classic methodology on control of captives teaches that captors must be able to identify the ”talented tenth” of those subjugated, especially those who show promise of providing the kind of leadership that might threaten the captor’s control.

Those so identified are separated from the rest of the people by:

1. Killing them off directly, and/or fostering a social system that encourages them to kill off one another.