Obama And The Not So Secret Secret Government

Vote all you want. The secret government won’t change. 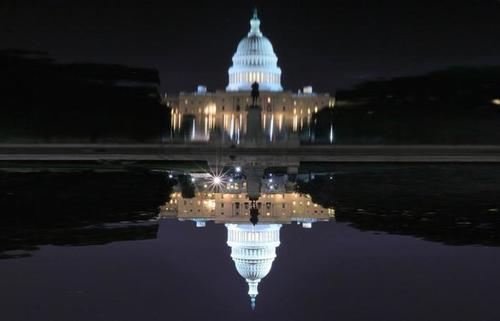 The people we elect aren’t the ones calling the shots, says Tufts University’s Michael Glennon

THE VOTERS WHO put Barack Obama in office expected some big changes. From the NSA’s warrantless wiretapping to Guantanamo Bay to the Patriot Act, candidate Obama was a defender of civil liberties and privacy, promising a dramatically different approach from his predecessor.

But six years into his administration, the Obama version of national security looks almost indistinguishable from the one he inherited. Guantanamo Bay remains open. The NSA has, if anything, become more aggressive in monitoring Americans. Drone strikes have escalated. Most recently it was reported that the same president who won a Nobel Prize in part for promoting nuclear disarmament is spending up to $1 trillion modernizing and revitalizing America’s nuclear weapons.

Why did the face in the Oval Office change but the policies remain the same?

Perhaps Candidate Obama’s essential objection to the policies of the national security state was that President Obama wasn’t in charge of them?

Critics tend to focus on Obama himself, a leader who perhaps has shifted with politics to take a harder line. But Tufts University political scientist Michael J. Glennon has a more pessimistic answer: Obama couldn’t have changed policies much even if he tried.

Though it’s a bedrock American principle that citizens can steer their own government by electing new officials, Glennon suggests that in practice, much of our government no longer works that way. In a new book, “National Security and Double Government,” he catalogs the ways that the defense and national security apparatus is effectively self-governing, with virtually no accountability, transparency, or checks and balances of any kind. He uses the term “double government”: There’s the one we elect, and then there’s the one behind it, steering huge swaths of policy almost unchecked. Elected officials end up serving as mere cover for the real decisions made by the bureaucracy.

Glennon’s critique sounds like an outsider’s take, even a radical one. In fact, he is the quintessential insider: He was legal counsel to the Senate Foreign Relations Committee and a consultant to various congressional committees, as well as to the State Department. “National Security and Double Government” comes favorably blurbed by former members of the Defense Department, State Department, White House, and even the CIA. And he’s not a conspiracy theorist: Rather, he sees the problem as one of “smart, hard-working, public-spirited people acting in good faith who are responding to systemic incentives”—without any meaningful oversight to rein them in.

Part of the problem is electing a smalltimer like Obama. For example, Obama ended up leaving GWB’s Defense Secretary, career Deep Stater Robert Gates, in charge of the Pentagon into 2011. Why? Well, Gates seemed like a pretty reasonable guy and Obama basically didn’t know anybody for that kind of job. Obama was a state legislator, civil rights attorney, and memoirist, not somebody who knows about military stuff. Obama doesn’t make friends easily and he doesn’t like to go out of his comfort zone to get to know people who aren’t upper crust blacks, so this whole military-industrial complex thing was kind of a mystery to Obama.

IDEAS: What evidence exists for saying America has a double government?

GLENNON: I was curious why a president such as Barack Obama would embrace the very same national security and counterterrorism policies that he campaigned eloquently against.

Once again, because now he’s in charge of them.

… IDEAS: Why would policy makers hand over the national-security keys to unelected officials?

The presidency itself is not a top-down institution, as many people in the public believe, headed by a president who gives orders and causes the bureaucracy to click its heels and salute. National security policy actually bubbles up from within the bureaucracy. Many of the more controversial policies, from the mining of Nicaragua’s harbors to the NSA surveillance program, originated within the bureaucracy. John Kerry was not exaggerating when he said that some of those programs are “on autopilot.”

Occasionally, you’ll get a President who knows everybody who is anybody, like Richard Nixon, who can wrestle the national security state around to his policies. After all, what can agencies like the FBI or the CIA do to a strong-willed elected President like Nixon who just won re-election in a crushing landslide?