I remember seeing this person, Dalia Mogahed, on a C-Span presser promoting a Gallup poll about Muslims residing in America, which inspired me to write a critical blog item: Muslim Poll Omits the Negative. At that time, Muslim mouthpiece Mogahed chirped out the magical D-word, "We discovered how diverse Muslim Americans are." So meaningful.

She is also one of Obama's many advisors, and she has used that position to spread the lie that Islam is a "religion of peace."

Remember that the President stated in Cairo to a Muslim audience that "the United States government has gone to court to protect the right of women and girls to wear the hijab and to punish those who would deny it."

Instead of assuring Muslims that they can oppress women in America, it would have been nice for the President to stand on the side of women who don't want to be imprisoned by their strictures of their misogynous religion. But Obama appears to prefer diversity ideology over justice.

Miss Mogahed, appointed to the President's Council on Faith-Based and Neighbourhood Partnerships, said the Western view of Sharia was "oversimplified" and the majority of women around the world associate it with "gender justice".

The White House adviser made the remarks on a London-based TV discussion programme hosted by Ibtihal Bsis, a member of the extremist Hizb ut Tahrir party.

The group believes in the non-violent destruction of Western democracy and the creation of an Islamic state under Sharia Law across the world.

During the 45-minute discussion, on the Islam Channel programme Muslimah Dilemma earlier this week, the two members of the group made repeated attacks on secular "man-made law" and the West's "lethal cocktail of liberty and capitalism".

They called for Sharia Law to be "the source of legislation" and said that women should not be "permitted to hold a position of leadership in government".

Miss Mogahed made no challenge to these demands and said that "promiscuity" and the "breakdown of traditional values" were what Muslims admired least about the West. [...]

So very offensive remarks were made by a member of an Islamic extremist group against America and the West, with no objection from the President's advisor on Muslim affairs. [WATCH.] No wonder some people think Obama is a closet Muslim if this is the kind of person he chose as a counselor.

Of course, sharia law is not merely oppressive toward women; it is seen by jihadist Muslims as the future replacement for the Constitution and other documents of national law when Islam triumphs over western civilization. Advocating sharia could easily be seen as seditious.

Below, a woman is about to be stoned to death for adultery in Iran, according to sharia law. 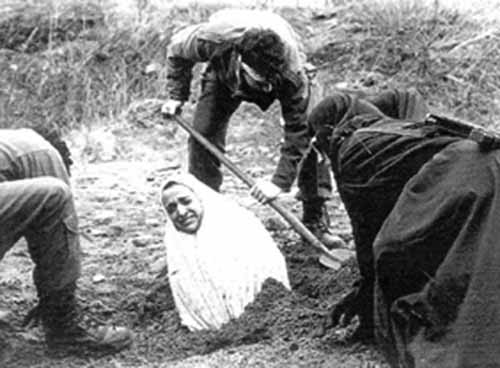