Sometimes it’s hard not to think that the current government isn’t one big criminal enterprise.

Today’s example is all the more remarkable because it came from the Obama-worshippingÂ New York Times. Apparently the Obama henchmen are frightened that Americans might somehow connect criminal drugs with Mexico (!) We wouldn’t want anyone to think ill of Mexico after all, since it is such a loyal friend and never asks anything of America.

Mexico is only one of the most violent countries on earth because of its drug cartels warring with each other over influence and territory, which has caused the violent deaths ofÂ more than 20,000 in the last three years.

WASHINGTON – In an apparent effort to minimize diplomatic turbulence with the Mexican government, the Obama administration has been delaying for weeks the release of a Justice Department report that describes a ”high and increasing” availability of methamphetamine mainly because of large-scale drug production in Mexico.

The report, obtained by The New York Times, is called the 2010 National Methamphetamine Threat Assessment by theÂ National Drug Intelligence Center of the Justice Department. It portrays drug cartels as easily able to circumvent the Mexican government’s restrictions on the importing of chemicals used to manufacture meth, which has reached its highest purity and lowest price in the United States since 2005.

Completed in mid-May, the report – which in previous years has been distributed to state and local police forces and posted online without fanfare or controversy – has not yet been released, partly because of the increasingly delicate politics of the United States-Mexico border and drugs.

At one point, copies of the report were printed and boxes of it were shipped to San Diego to be distributed to law enforcement officials at a meth conference. But White House officials raised concerns because that same week President Felipe Calder??n of Mexico was coming to Washington for a state visit. The release of the report has since been repeatedly delayed. 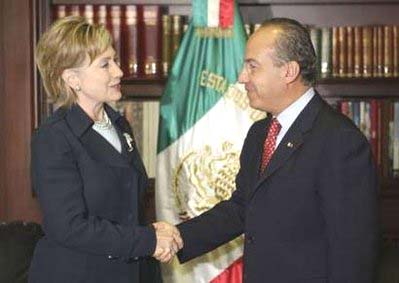 The report was particularly touchy because it came less than two months after the distribution of another National Drug Intelligence Center study that had portrayed the drug trafficking situation in Mexico in stark terms, promptingÂ complaints from the Mexican government. [...]

The internal wrangling over the center’s Mexico-related drug reports traces back to March 23, when a delegation of top Obama administration officials – including Defense Secretary Robert M. Gates and Secretary of State Hillary Rodham Clinton – went to Mexico City for a show of solidarity in fighting drug cartels.

But the positive diplomatic feelings that resulted from that meeting were soon marred by an apparent coincidence. On March 25, two days after the trip, the National Drug Intelligence Center – which is based in Johnstown, Pa., and led by a career official, Michael Walther – publicly distributed its annual National Drug Threat Assessment.

It portrayed the Mexican drug cartel situation in a harsh light, describing a surge in production of heroin and marijuana due to ”greatly reduced efforts to eradicate drug crops” in Mexico. An Obama administration official and an official in the Mexican government each said that Mexico raised concerns with the United States about the report.

And so it goes. TheÂ Times story delves at length into the diplomatic intricacies and in doing so misses the bigger picture: Obama’s fear of offending Mexico only serves to make like easier for Mexican organized crime. A bracing shot of plain talk might possibly wake up Mexico’s somnambulant rulers.

Instead, Washington thinks it should help uphold the fantasy that Mexico City is fighting the drug cartels. But to what end? Kicking the can down the road for a few months longer? Obama would be wise to lay out a Plan B of what to do in case the Mexican state collapses under the onslaught of its failing drug war.