The federal National Center for Education Statistics has released a report linking the 2011 National Assessment of Educational Progress test scores by state to the TIMSS math and science tests of 47 countries.

There is always a ton of noise in these kind of figures, but a few general patterns can be recognized for those not morally averse to pattern recognition.

Here are the countries and American states that did better than the international average for 8th grade math. The top 5 in the world are Korea, Singapore, Taiwan, Hong Kong, and Japan.

What do these countries have in common? It probably has something to do with, uh, how they hand out homework, or something.

What do these states have in common?
Senator Daniel Patrick Moynihan calculated in 1993 that there's an r = .52 correlation between a state's test scores and its distance in miles from the Canadian border.

It must be the hockey.

In case you are wondering, the NCES report doesn't mention race. So don't even think about it.

And here's the bottom of 8th grade science (not math): 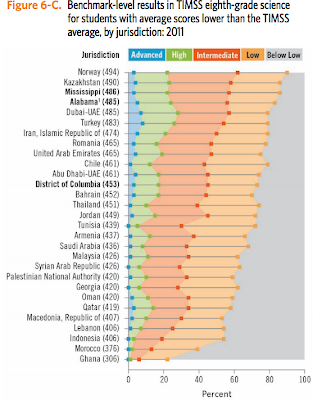