Oakland Is Burdened with Unemployable Refugees Having Expensive Health Problems

I heard on the radio this morning that Burmese refugee children residing in Oakland have elevated levels of lead in their blood. That would be extra-bad news, because “Just 10 micrograms of lead per deciliter of blood can permanently lower a child’s IQ by four to five points,” according to the San Francisco Chronicle, Jan 15, 2006.

An article in the journal Public Health Reports in 2005 observed, ”Lead poisoning in children imposes both immediate and long-term financial burdens on taxpayers.”

California already has plenty of problems (mostly self-induced) and the city of Oakland just laid off hundreds employees. Alameda County has an unemployment rate of 9.6% (as of Nov 2011).

It is crazy that the city would continue to admit non-English-speaking tribal people with medical issues causing lowered IQ who are difficult to place in jobs. (Communities can say “No thanks” on refugees to the State Department and it seems to work.) But then nobody ever accused Oakland of having good governance.

Oakland is overwhelmed with poverty, crime and dysfunction, yet it imports still more diversity. And the violence there is “worse than Iraq” according to some capable of making that judgment.

Below, Burmese refugees attempt to learn English in Oakland. 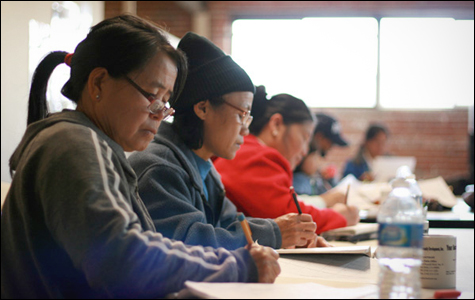 Here’s the radio refugee story with audio at the link:

Gov. Pushes to Scale Back State Testing in Schools
In today’s State of the State speech, Governor Jerry Brown announced he wants to cut back on the amount of state testing going on in California public schools. The president of the state Federation of Teachers says it’s clear the governor has been listening to parents, teachers and experts.

Burmese Refugees at Higher Risk for Lead Poisoning
Burmese refugee children who are headed to the U.S. often have high levels of lead in their bodies, according to a newly released study. Oakland pediatrician Joan Jeung says many of her Burmese partients live in low-income housing that further increases their chances of getting lead poisoning. Oakland is home to about 400 Burmese refugees.

A recent article in a local lib tabloid drew a bleak picture of Burmese recently resettled as refugees in Oakland:

Poverty Stricken: A new report shows that Oakland’s refugees from Burma are stuck in extreme poverty, with up to 80 percent unemployment, East Bay Express, January 6, 2012

• 63 percent are unemployed. Those who are employed have sporadic, low-wage jobs.

• Among Karenni, 81 percent are unemployed, 90 percent live in extreme poverty, and 90 percent have no high school education.

• 57 percent live below the threshold for extreme poverty, making less than $1,000 for a family of five. Most of the remainder lives below the poverty line.

• 74 percent say lack of English is their biggest barrier to accessing healthcare.

Hae Htoo lives in a one-bedroom unit in East Oakland with five other family members. The twenty-year-old arrived in the US six months ago and hopes to learn English and find a job. But a recent report by San Francisco State University and nonprofit Burma Family Refugee Network shows that refugees from Burma who now live in Oakland, such as Hae Htoo, are facing dire circumstances. Most arrived in the US during a severe recession and have little to no English skills.

“The recession is nationwide,” noted Russell Jeung, SF State professor of Asian American Studies, who led the project. “The difference with Oakland is that it’s hit harder by the recession, has even more unemployment and less jobs.”

An estimated 84,000 refugees originally from Burma have made the US their new home since 2007. About seven hundred have resettled in Oakland. Karen, Karenni, and other ethnic minorities make up the majority of these refugees. Many fled Burma, now Myanmar, to escape military attacks and persecution and lingered in Thai refugee camps or in Malaysia for years. Those accepted to come to the US receive a few days of cultural orientation before boarding a plane.

The community-based research project found that 57 percent of Oakland’s Burmese refugees live in extreme poverty, 63 percent are unemployed, and 64 percent have poor or no English skills, even though some have been in the US for four years. Among Karenni, 81 percent reported that they are unemployed, 90 percent live in extreme poverty, and 90 percent have no high school education. The first wave of Karenni refugees arrived in 2009, so there was no existing network.

Of the nearly two hundred people surveyed, the majority are living in extreme poverty, with an income of less than $1,000 a month for a family of five. Those surveyed say their top needs are English classes, interpretation, and healthcare. More than two hundred students in Asian American Studies classes helped administer the surveys as part of a class. The surveys were conducted at health fairs with Burmese, Karen, and Karenni and other interpreters, and the answers are self-stated. END_OF_DOCUMENT_TOKEN_TO_BE_REPLACED