NYT: Wise Latina Gets Into Georgetown by Being Oppressed by "The Daves"

Essays About Work and Class That Caught a College’s Eye MAY 21, 2015

Of the 1,200 or so undergraduate admission essays that Chris Lanser reads each year at Wesleyan University, maybe 10 are about work.

This is not much of a surprise. Many applicants have never worked. Those with plenty of money may be afraid of calling attention to their good fortune. And writing about social class is difficult, given how mixed up adolescents often are about identity.

Yet it is this very reluctance that makes tackling the topic a risk worth taking at schools where it is hard to stand out from the thousands of other applicants. Financial hardship and triumph, and wants and needs, are the stuff of great literature. Reflecting on them is one excellent way to differentiate yourself in a deeply personal way.

Each year, to urge them on, we put out an open call for application essays about these subjects and publish the best essays that we can find. This year, we chose seven with the help of Julie Lythcott-Haims, the former dean of freshmen at Stanford whose new book, “How to Raise an Adult,” is coming out next month. You can read the full essays at nytimes.com/yourmoney.

Each year, we put out a call for college application essays about money, work and social class. This year, we picked seven — about pizza, parental sacrifice, prep school students, discrimination and deprivation. …

A good college admissions consultant should be able to write a poignant essay for your child about how he or she has overcome the challenges of poverty for no more than $1,500, $2,000 tops. If they ask for $3,000 they’re just trying to rip you off because you look rich.

The only reason to pay $3,000 or up is if you also want the essay to work some kind of affirmative action scam. Experienced essay ghostwriters know that racial/ethnic diversity grifts are trickier than fudging about class, although, of course, they can also be more rewarding. So you’ll need to pay top dollar for a seasoned professional who understands just how far the essay he writes under your child’s name can push the race/ethnicity envelope. A few references to your child’s abuelita are usually safe. (Who is going to check?) But be wary of discount college application consultants based in Nigeria who will email you with a proposal to have your child boast of being the only living heir of the deposed Mbubu IV, rightful God-Emperor of Kush.

The single most memorable line we read this year came from an essay by Carolina Sosa, who lives in Centreville, Va., and will attend Georgetown University. In writing about her father’s search for a job, she described the man named Dave who turned him away.

“Job searching is difficult for everyone, but in a world full of Daves, it’s almost impossible,” she wrote. “Daves are people who look at my family and immediately think less of us. They think illegal, poor and uneducated. Daves never allow my dad to pass the first round of job applications. Daves watch like hawks as my brother and I enter stores. Daves inconsiderately correct my mother’s grammar. Because there are Daves in the world, I have become a protector for my family.”

A truly professional essay consultant will a bring a well-developed feel for which first names are good to use as implicit ethnic slurs and which aren’t. Obviously, if you once lost out on a promotion to EVP to a fellow exec named Dave, that’s great and your consultant will be sure to use the name as is. But what if your rival wasn’t named Dave? A veteran admissions essay writer will understand the nuances about which names are demonizable and which aren’t. For example,

David — Maybe, maybe not. Why not shorten it to Dave?

Dana — Worrisome, too gender-neutral. Why not change to it Dave?

Dov — Uh-oh … Do you think reporter Ron Lieber of the NYT would enthuse about an essay that read:

“Job searching is difficult for everyone, but in a world full of Dovs, it’s almost impossible,” she wrote. “Dovs are people who look at my family and immediately think less of us. They think illegal, poor and uneducated. Dovs never allow my dad to pass the first round of job applications. Dovs watch like hawks as my brother and I enter stores. Dovs inconsiderately correct my mother’s grammar. Because there are Dovs in the world, I have become a protector for my family”? 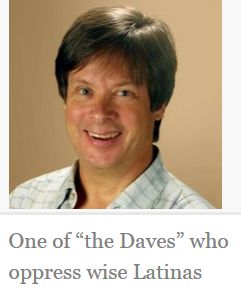 Vanessa J. Krebs, assistant director of undergraduate admissions at Georgetown, who reads about 1,400 essays year, told me that when she first received my interview request, the phrase “the Daves” immediately jumped out of her memory bank.

Some low cost essay vendors try to cut corners by simply writing under your child’s name, “I hate straight white men.” And while that traditional meat and potatoes approach to getting on the good side of admissions staffers can often work, you are better off paying for the kind of plausible deniability that artful phrases like “the Daves” allow.

Also a good consultant will know how to customize the name of the Evil Straight White Male for each college. For example, businessman Dave Dornsife recently gave $200 million to USC. So the phrase “a world full of Daves” might worrisomely remind the USC admissions committee that straight white male alumni like Dave Dornsife are, by far, the biggest donors to colleges, and so they’d better admit a few Daves today if they want to have any Mr. Dornsifes in the future. Therefore, an expert consultant would vary the essay he writes for your child’s USC application to read “a world full of Dicks.” This service costs extra, but you get what you pay for.

Though Ms. Sosa might easily have become embittered by her encounters with the Daves, Ms. Krebs said that she was moved by the fact that the essay concluded with the desire to pursue a career in public service, even if she wasn’t exactly sure where that desire would take her.

With Ms. Sosa’s sincere, heartfelt desire to do something about “a world full of Daves,” I’m sure she’d be open to a government career in, say, kulak liquidation. But a professional consultant can advise on whether saying that in an essay would be considered by admissions staffers as “edgy” or “on the nose.” These subtle distinctions are constantly changing, so that’s why you need to spend a fair amount on getting a pro to concoct your child’s essay.