From the New York Times, the story of a woman who shut down her MakeOut Labs startup to start a sexting app called Glimpse (modeled upon Snatchsnap). But she quit because of all the sexists in the sexting industry.

Stop snickering. It's a national crisis. 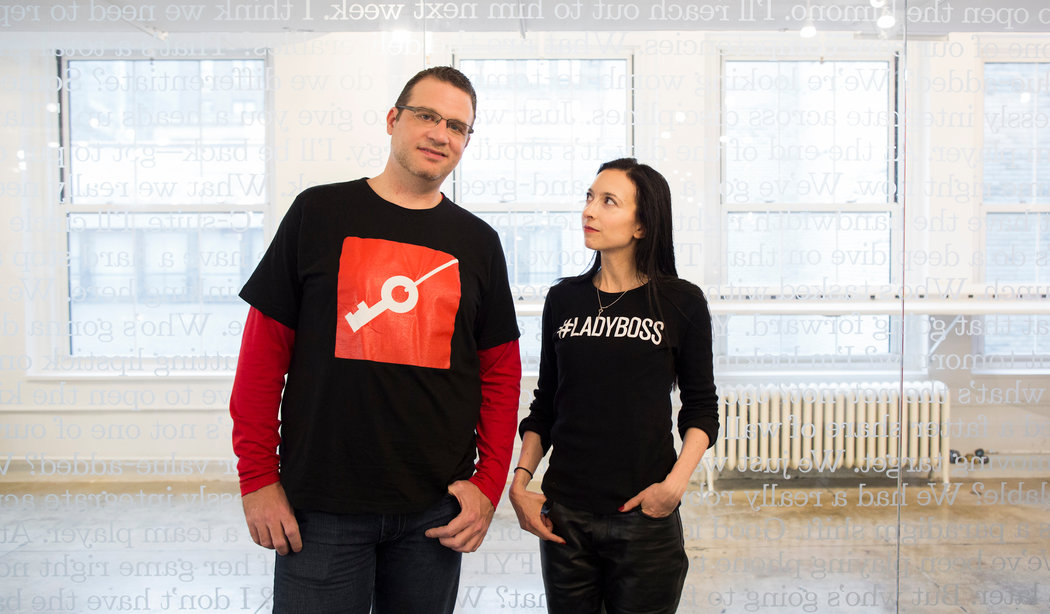 Elissa Shevinsky can pinpoint the moment when she felt that she no longer belonged.

She was at a friend’s house last Sept. 8, watching the live stream of the TechCrunch Disrupt hackathon on her laptop and iPhone. Entrepreneurs were showing off their products, and two young Australian men, David Boulton and Jethro Batts, stood behind the podium to give their presentation. “Titstare is an app where you take photos of yourself staring at tits,” Mr. Boulton began, as photographs of women’s chests on a cellphone flashed on the screen behind him.

After some banter, Mr. Batts concluded, “This is the breast hack ever.”

Something in Ms. Shevinsky’s mind clicked. If ever there was proof that the tech industry needed more women, she thought, this was it. ...

Ms. Shevinsky felt pushed to the edge. Women who enter fields dominated by men often feel this way. They love the work and want to fit in. But then something happens — a slight or a major offense — and they suddenly feel like outsiders. The question for newcomers to a field has always been when to play along and when to push back.

Today, even as so many barriers have fallen — whether at elite universities, where women outnumber men, or in running for the presidency, where polls show that fewer people think gender makes a difference — computer engineering, the most innovative sector of the economy, remains behind. Many women who want to be engineers encounter a field where they not only are significantly underrepresented but also feel pushed away.

Tech executives often fault schools, parents or society in general for failing to encourage girls to pursue computer science. But something else is at play in the industry: Among the women who join the field, 52 percent leave by midcareer, a startling attrition rate that is double that for men, according to research from the Harvard Business School.

A culprit, many people in the field say, is a sexist, alpha-male culture that can make women and other people who don’t fit the mold feel unwelcome, demeaned or even endangered.

And / or they quit the tech industry to be the wife and homemaker for one of those alpha males. It's like that giant hub-bub last year about how women students at Harvard Business School weren't getting as good grades as men, and it finally turned out to be because they were going out on so many dates with future captains of industry.

“It’s a thousand tiny paper cuts,” is how Ashe Dryden, a programmer who now consults on increasing diversity in technology, described working in tech. “I’ve been a programmer for 13 years, and I’ve always been one of the only women and queer people in the room. I’ve been harassed, I’ve had people make suggestive comments to me, I’ve had people basically dismiss my expertise. I’ve gotten rape and death threats just for speaking out about this stuff.” ...

Ms. Shevinsky never received death threats, but she experienced her share of come-ons and slights. A few days after Mr. Dickinson’s “It is not misogyny” tweet, she quit Glimpse. She had been aware of earlier cringe-making tweets in which her business partner had joked about rape or questioned even the most basic feminist precepts. (“Women’s suffrage and individual freedom are incompatible. How’s that for an unpopular truth?”) Still, she admired Mr. Dickinson’s technical skills and work ethic. Married and then 40, he was more experienced and serious about work than many other tech types she knew, and she said he always treated her with respect.

But after the Twitter controversy, she decided that she just couldn’t work with him anymore.

Uh, you're starting a sexting business ...

Two days after the TechCrunch show, Business Insider forced Mr. Dickinson to resign. The Australian entrepreneurs and TechCrunch each apologized. But incidents like these aren’t exceptional.

“We see these stories, ‘Why aren’t there more women in computer science and engineering?’ and there’s all these complicated answers like, ‘School advisers don’t have them take math and physics,’ and it’s probably true,” said Lauren Weinstein, a man who has spent his four-decade career in tech working mostly with other men, and is currently a consultant for Google.

“But I think there’s probably a simpler reason,” he said, “which is these guys are just jerks, and women know it.”

The choice for people who are uncomfortable with the “bro” culture is to try to change it or to leave — and even women who are fed up don’t always agree on how to go about making a change. But leaving can be hard too.

“There was only one thing I wanted to do,” Ms. Shevinsky said. “Be the C.E.O. of Glimpse.”

When Ms. Shevinsky was introduced to engineering culture at Williams College, she got no hint of sexism. A political theory major, she learned to code from a boyfriend, and she described their engineer friends as “forward-thinking feminists.”

She worked in product development for a number of start-ups and was a co-founder of a dating site.

She settled in New York, where she got to know Mr. Dickinson at tech meet-ups. When she had a new business idea — a kind of Snapchat for adults that prevents people from taking screen shots of private pictures — she sought out his advice.

Last spring, they decided to build the app together. At first, they conceived it as a sexting product,

but later they shifted to a service that could be used by anyone concerned about keeping their messages safe from prying eyes. They called it Glimpse.

By August, Ms. Shevinsky had closed her dating site to work on Glimpse. Mr. Dickinson, who had his full-time job at Business Insider, helped when he could.

“I remember thinking just that I was so lucky that Pax was going to work with me,” Ms. Shevinsky said. “At the time I was still relatively unknown, and he was one of the best technologists I’d met.”

Computer science wasn’t always dominated by men. “In the beginning, the word ‘computers’ meant ‘women,’ ” says Ruth Oldenziel, a professor at Eindhoven University of Technology in the Netherlands who studies history, gender and technology. Six women programmed one of the most famous computers in history — the 30-ton Eniac — for the United States Army during World War II.

But as with many professions, Dr. Oldenziel said, once programming gained prestige, women were pushed out. Over the decades, the share of women in computing has continued to decline. In 2012, just 18 percent of computer-science college graduates were women, down from 37 percent in 1985, according to the National Center for Women & Information Technology. ...

Tech’s biggest companies say that recruiting women is a priority. “If we do that, there’s no question we’ll more than double the rate of technology output in the world,” Larry Page, the chief executive of Google, said last spring. Yet at Google, less than a fifth of the engineers are women.

In other words, Larry's lying.

That’s a typical figure. Twenty percent of software developers are women, according to the Labor Department, and fewer than 6 percent of engineers are black or Hispanic. Comparatively, 56 percent of people in business and financial-operations jobs are women, as are 36 percent of physicians and surgeons and one-third of lawyers.

At tech start-ups, often considered the most desirable places to work, the number of women appears to be even lower. The companies generally don’t release these numbers publicly, but an engineer at Pinterest has collected data from people at 133 start-ups and found that an average of 12 percent of the engineers are women.

Sexism exists in many places, but start-up companies have particular qualities that can allow problems to go unchecked. The lines between work and social life are often blurry, because people tend to be young and to work long hours, and the founders and first employees are often friends. And start-ups pride themselves on a lack of bureaucracy, forgoing big-company layers like human resources departments. They say they can move faster that way, without becoming bogged down in protocol.

But a result can be an anything-goes atmosphere, said Julie Ann Horvath, a software designer and developer who publicly quit her job last month at GitHub, the coding website, saying that there was a culture of intimidation and disrespect of women. GitHub, founded in 2008, hired a senior H.R. executive only in January.

“If there is no structure, that’s actually more harmful to marginalized people,” Ms. Horvath said in an interview while she still worked at GitHub. “It’s just unprofessional. Tech needs to grow up in a lot of ways.” ...

“In engineering, whoever owns the code, they have the power,” said Ana Redmond, a software engineer. When she worked as a senior engineer at a big company, Expedia, she said she was constantly underestimated by male colleagues and suffered because she was not willing to leave her children to work the hours needed to “own the code.”

After the Titstare presentation, a commenter calling himself White_N_Nerdy wrote on Reddit, “I’m honestly trying to understand why anyone says that females are ‘needed’ in the tech industry.” He continued: “The tech community works fine without females, just like any other mostly male industry. Feminists probably just want women making more money.”

That sense of being targeted as a minority happens at the office, too. That is part of the reason nearly a third of the women who leave technology jobs move to nontechnical ones, according to the Harvard study.

Or maybe because they discover they don't like technical jobs and shouldn't have listened to the feminist hype in the first place?

In summary, I'm shocked, shocked to hear of sexism in the sexting business. Have we no shame?