From the NYT Opinion Pages:

Putting Donald Trump on the Couch

AS surprising as Donald J. Trump’s political ascendance may be, it is not unprecedented. He is the latest in a long line of demagogues that have appeared throughout American history to point accusing fingers at blacks, foreigners, Masons, Jews, socialists, central bankers and others. What’s more mysterious are the roots of his vast insecurity — his compulsive need to trumpet his wealth, his smarts, his popularity. What is he compensating for?

When Hollywood wants us to understand a character, it gives us a Rosebud — an event or an object, like the wooden sled in “Citizen Kane,” that reflects the character’s essence. Mr. Trump’s Rosebud moment, I learned recently from a story on WNYC, happened one day in 1964, when he accompanied his father to the opening ceremony of the Verrazano-Narrows Bridge.

As Mr. Trump recounted the story for Howard Blum in The New York Times in 1980: “The rain was coming down for hours … But all I’m thinking about is that all these politicians who opposed the bridge are being applauded.” Even as a wet-behind-the-ears kid, he wanted the reporter to understand, he couldn’t abide the hypocrisy of big shots. “In a corner,” he continued, “just standing there in the rain, is this man, this 85-year-old engineer who came from Sweden and designed this bridge, who poured his heart into it, and nobody even mentioned his name.

“Great salespeople truly understand the people they are dealing with,” Mr. Trump has written. And who are the people that he is closing his presidential deal with? People who are afraid that they are being made suckers too. Mr. Trump’s angry certainty that immigrants and other losers are destroying the country while the cultural elites that look down on him stand by and do nothing resonates strongly with the less-educated, lower-income whites who appear to be his base. …

To tell you the truth, I am starting to worry that his poisonous message may carry him to the White House.

Then the whole world really will be laughing at our stupidity.

What a bunch of losers, they’ll say. And they’ll be right. 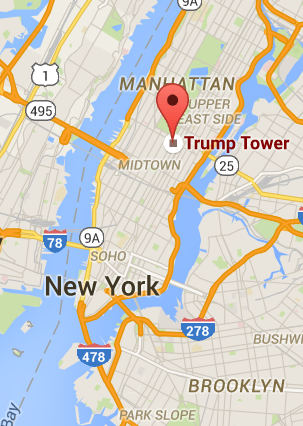 Obviously, living as he does in Trump Tower on Fifth Avenue at 57th Street, Trump is some kind of hick who doesn’t understand anything about the sophisticated morals of the globalist oligarchs who can afford to live in Trump Tower with him. If Trump weren’t such a hayseed he’d realize that his neighbors would never take the American citizenry for a sucker. Why? Because they are Good. The only reason they love insourcing workers and outsourcing jobs is because they grasp the Blessings of Diversity. That’s why they live in Trump Tower. Because Jay-Z lives there. Or is it Derek Jeter? Anyway, haven’t you been reading The Times? Would Carlos Slim tell you something that’s shaded toward his self-interest?

Shouldn’t the GOP candidate be some urban sophisticate as broke as Marco Rubio who has to believe what his car dealer backer tells him or his motorboat would get repossessed?

The last thing America needs is some bumpkin President who has reason to believe that his tenants in Trump Tower tend to be grasping kleptocrats who can’t be trusted to have the American citizenry’s public weal in mind.

(Dave Pinsen points out the example of Chuck Blazer, the American on the FIFA soccer council who kept two apartments in Trump Tower, one for his cats. Blazer is the guy who rolled over on the now-arrested FIFA Caribbean representatives who facilitated Qatar getting the 2022 World Cup. But if you don’t trust classy international soccer executives like Sepp Blatter and his minions, you must be some kind of total redneck.)