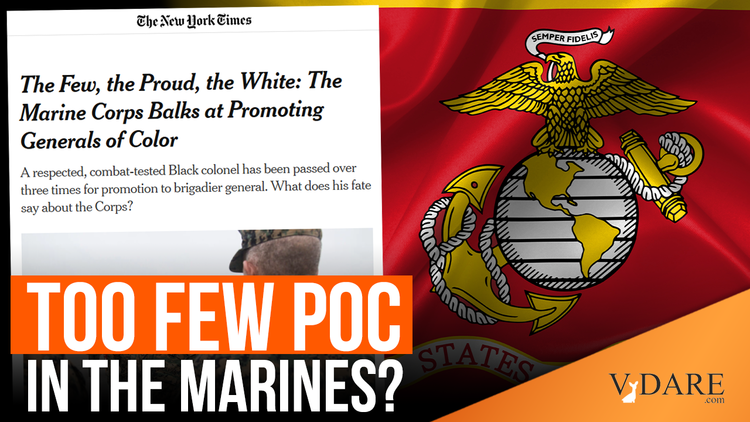 NYT: Time to Converge the Marines

Proud and fierce in their identity, the Marines have a singular race problem that critics say is rooted in decades of resistance to change. A handful of white men rule over 185,000 white, African-American, Hispanic and Asian men and women. https://t.co/C3YvLQMr41

The Few, the Proud, the White: The Marine Corps Balks at Promoting Generals of Color

A respected, combat-tested Black colonel has been passed over three times for promotion to brigadier general. What does his fate say about the Corps? 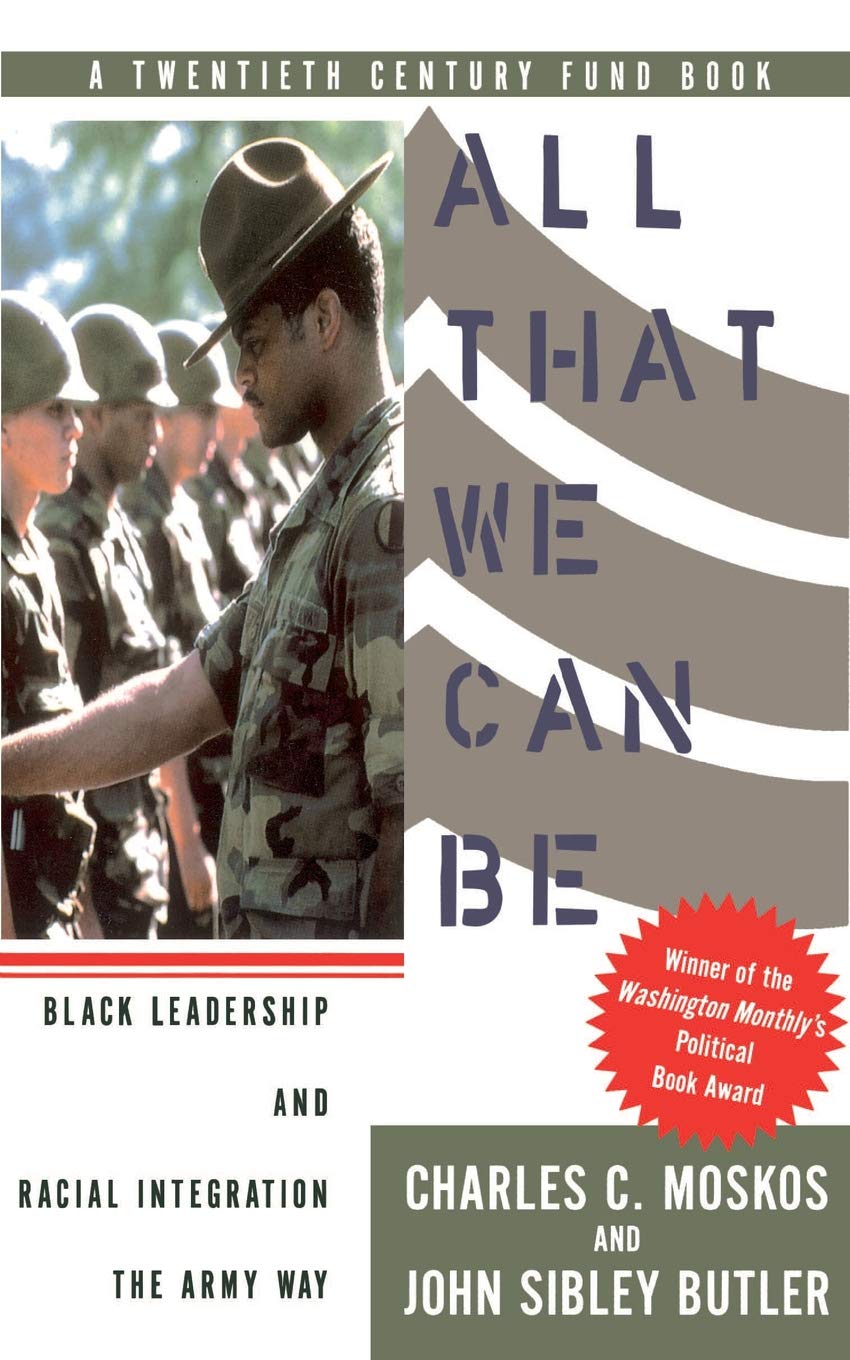 Blacks who want to make a career in the military generally focus on working in, say, logistics rather than in combat arms. See sociologists Charles Moskos and John Sibley Butler’s book All That We Can Be from the 1990s.

But if you want to be a Marine 4-star general, you need to be a fighting man.

That’s how the Marines work.

Moskos & Butler’s book on blacks in the Army 25+ years ago pointed out that black career soldiers tend to have sensible career plans focusing on getting organizational jobs that will get them post-Army government jobs and eventually collect two pensions.

In contrast, a lot of the white recruits wanted to “play Rambo for four years, then go to college.” Note, for example, the legendary picture of Tiger Woods and the Navy SEALs.

The Army is an interesting counter-stereotype situation where the blacks tend to be more prudent and career-minded and the whites more death or glory.

Moskos & Butler said that by 1990 many black enlistees in the Army were 2nd or 3rd generation. Serving in supply in the Army was becoming a bit of a hereditary career for a part of the black lower middle class, with a lot of career guidance from elders on what jobs to go into.

Way back in 1990, 7% of US Army generals were already black. The 1980s Cold War Army didn’t fight much, but sat waiting in the Fulda Gap. This, I would imagine, benefited the careers of blacks in logistics. Since then, we’ve had lots of small wars, which helped combat arms officers, who tend to be white.

Since the Marines first admitted African-American troops in 1942, the last military service to do so, only 25 have obtained the rank of general in any form.

My impression is that the Marines are more favored by Latino than black enlistees. For example, in 2016, 20.5% of enlisted Marines were Hispanic vs. 11.5% black. Blacks in the later 20th Century were drawn to the Army (but of course that meant that the other branches were being chided for not having as many blacks as the Army, so they had to lure black recruits away from the Army).

Not one has made it to the top four-star rank, an honor the Marines have bestowed on 72 white men. Six African-Americans reached lieutenant general, or three stars. The rest have received one or two stars, the majority in areas like logistics, aviation and transport, areas from which the Marine Corps does not choose its senior leadership.

So, 8.5% of the generals in an institution that isn’t particularly of interest to blacks. In 2016 only 4.8% the Marine officers at the low level 01-03 ranks were black, so it looks like black officers do pretty well promotion-wise, but there just aren’t many black officers in the Marines. It’s almost as if the famously distinctive culture of the Marines appeals more to some people than to other people, and the Marines don’t appeal that much to ambitious middle class blacks. 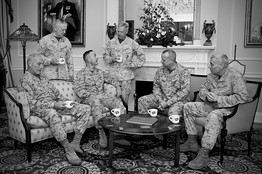 Which seems fine to me. But to the New York Times it’s Cause for Concern.

The Marines have the worst diversity representation in their top ranks. In 2013, the branch released a photo of its six four-star generals, all gathered in desert camouflage at the commandant’s home at the Marine Barracks in Washington: John F. Kelly, Jim Mattis, Joseph F. Dunford Jr., James F. Amos, John R. Allen and John M. Paxton. The men are smiling as they hold their white Marine Corps coffee mugs.

The Marines are so racist that even their coffee mugs are white!

All six have garnered respect across the political spectrum. But to Black Marines, the photo evokes a place where they do not belong.

Here’s a US Army official history of African-American soldiering that confirms my impressions:

When the Army deployed for the Persian Gulf War in 1990, African Americans constituted 29.06 percent of the active force. As part of its efforts to rebuild after Vietnam, the service had made a strong commitment to equal opportunity. Much of the Army’s success during the war was the result of this commitment, the recruitment of high-quality personnel, better training methods, and a renewed emphasis on the importance and prestige of the noncommissioned officer corps. Leading the military during this war was the Army’s second African American four-star officer and the first black Chairman of the Joint Chiefs of Staff, General Colin L. Powell. …

The 1991 Kuwait War was the peak of the Army’s prestige. The Gulf War was fought with the big Fulda Gap Era army built to fight the Soviets’ 53,000 tanks, but it had been freed up by the fall of the Berlin Wall. The next year Defense Secretary Dick Cheney cut the Army back sharply, but 1991 was definitely the wrong year for Saddam Hussein to fight the U.S. Army.

The Army was heavily black in the Gulf War and performed well. This was at a time when blacks back home were suffering big problems with crack and shootings, so the contrast was heartening.

Although the percentage of African Americans in the Army has remained disproportionate to their numbers in American society, the percentage has dropped since the early 1980s. In 2002, blacks comprised 25.1 percent of the active Army; in 2001, they comprised 15.6 percent of the Army National Guard and 25.8 percent of the Army Reserve. Research suggested several reasons for these changes. First, the percentage of other minorities, especially Hispanics, had increased. Second, high pay and generous educational benefits, together with several economic downturns since 1980 had helped to maintain a larger flow of high-quality white recruits. Finally, high-quality black youths now had more opportunities in civilian society than ever before.

The distribution of African Americans in the service by 2003 had developed in several unexpected ways. While the company grade officer percentage had risen to roughly a proportionate level, the percentage of field grade and general officers remained much lower. More surprisingly, the proportion of black soldiers in combat specialties had declined significantly by 2003. This was in part due to the large numbers of black women who had entered the service, and who were barred from holding such specialties. Other factors that have been suggested for this trend include higher black unemployment rates that motivate black males to select specialties that have skills easily transferable to civilian jobs, and family traditions of service in such specialties. Another suggested cause of this disparity is that a sizeable number of white males join not for a career or to obtain a marketable skill, but rather for the adventure and challenge provided by enlistment in the combat arms before continuing on with their civilian education and careers.

Since 2003 widespread opposition among African Americans to the Iraq War has led to a further decline in blacks joining the Army. Black recruits dropped to thirteen percent of the Army’s total enlistments in 2006 from twenty-three percent in 2001, and the total number of African Americans in the active Army declined to twenty-one percent.