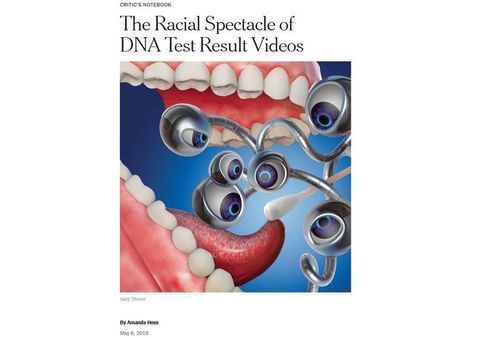 NYT: "The Racial Spectacle of DNA Test Result Videos" In Which “White People Deny The Grotesque Aspects Of Their Heritage”

As we all know, race doesn’t exist. Except DNA companies will tell you your racial ancestry to three decimal points. In the New York Times, Amanda Hess attempts to square this circle via the use of scare quotes:

Warning: before clicking on the link to the NYT, be aware that the illustration drawn up for the article is extraordinarily grotesque.

… 23andMe is among a crop of new services that have arrived to help us mine our genetic material for answers to questions we didn’t even know we had. These services’ ancestral algorithms are based on estimates and probabilities, not certainties, but they nevertheless claim to distill the self into a series of appealingly specific data points onto which personal narratives can be written. …

It’s probably not a coincidence that these mechanisms of biological self-discovery are on the rise now, amid seething tensions over racism, immigration and what constitutes a “real American.” White supremacists are drawn to DNA testing to prove their racial purity, excitedly publicizing their exclusively European ancestries (or else dismissing any trace of outside DNA as a Jewish conspiracy.) But progressive white people seem to be using these services in a different way: as methods for performing racial harmony and assuaging white guilt.

… The trend has exploded on YouTube, where you can watch “Asian-Americans Take a DNA Test,” “Irish People Take a DNA Test” and “Latinos Get Their DNA Tested.” In each, footage of a physical process — spitting into vials or swabbing cheeks — cuts quickly, as if by magic, to computerized results. We see people from the outside, then (surprise!) learn who they “really” are inside.

Ethnic backgrounds are distinct from social constructions of race, which are tied up in perceptions of skin color, shared cultures and historical oppression — and these public airings of DNA results often read as an attempt to transcend race by revealing hidden, scientific-seeming insights that expose our “true” origins. In “Latinos Get Their DNA Tested,” Gadiel Del Orbe — a producer for the Latino BuzzFeed channel Pero Like — learns that his DNA is more than 50 percent European, and exclaims, half-jokingly: “Hold on, time out. Am I white?”

Meanwhile, for actual white users, DNA testing services helpfully atomize whiteness into a series of percentage-point allegiances to various European countries. (The Try Guys episode teased out such associations; Mr. Kornfeld’s revelation of some Iberian DNA was punctuated with a flourish of Spanish music.) They also allow white people to seize on an even more transformative ethnic narrative. 23andMe, for instance, tracks genealogical lines so deeply that it claims to pinpoint ancestors that migrated to Europe from Siberia or the Middle East as far back as 10,000 years ago. In these genetic tales, modern racial dynamics become flattened into a kind of shared origin story.

In contrast to the white supremacist DNA testing fans, many white users perform delight at any hint of non-European origins in their results. In “Irish People Take a DNA Test,” one woman rejoices when she learns that she is 4.2 percent Jewish. “I knew there was a bit of Jew in me!” she exclaims. “I’m glad that I have other bits in me.” She calls it “a really nice surprise.”

And in the Try Guys episode, Keith Habersberger introduces himself as “the whitest man,” only to learn that 0.2 percent of his DNA could be traced to sub-Saharan Africa. To Mr. Yang, who had pegged him as 100 percent European, Mr. Habersberger gleefully says, “Suck it!” But when the 23andMe representative reveals that the African DNA was introduced in Mr. Habersberger’s bloodline between 1720 and 1810, the mood sours. As Mr. Kornfeld puts it: “I thought this was real cool until I remembered what the British were doing in the 1700s, and now I’m thinking it’s less cool.”

Even in videos that seek to dispel racism through multicultural celebration, historical realities sneak in. And that leads to another form of performance, where white people deny the grotesque aspects of their heritage

A memorable phrase: “white people deny the grotesque aspects of their heritage.”

, or else detach from them with self-deprecating wokeness. …

The exchange recalled Ben Affleck’s controversial appearance on “Finding Your Roots,” in which (it was later revealed) he successfully lobbied PBS to omit any mention of his slaveholding ancestor.

To his credit, Larry David allowed mention on the show of his two Jewish ancestors who were Southern slaveholders.

When Anderson Cooper appeared on the show, he modeled a different approach to such revelations. “Your ancestor was beaten to death” by a slave, Henry Louis Gates told him. “Honestly,” Mr. Cooper replied, “part of me thinks that’s awesome.”

If these YouTube videos treat DNA testing with credence and awe, a Twitter meme parodying 23andMe results pokes at these tests’ specious scientific certainty and pushes back at the idea that these ethnic ancestral breakdowns say much at all about us and our place in the world.

… These jokes ridicule the idea that anything truly relevant about our social realities can be measured to a fraction of a percent. As it turns out, DNA tests reveal plenty about us — just not what they claim to.

And if you think this article didn’t quite justify that assertion, well, that just proves you are a science-denying racist.