Here’s the beginning of a New York Times article: 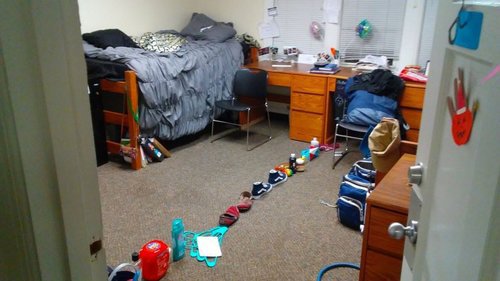 Vandalism, offensive jokes, even criminal assault — reports of bias-based harassment have spiked since Donald J. Trump’s victory in the presidential race. Few of the perpetrators have been caught, but here is a look at five cases in which people have been directly accused. Some apologized. One denied being responsible. Another said his actions had been misconstrued.

It Started With a Joke

When Isabel Manu started sending her classmate María Sanchez internet memes that mocked Mr. Trump’s plans to crack down on immigration, Ms. Sanchez, whose parents had come to the United States illegally from Mexico, tried to shake it off: “It was just a little funny, like ha, O.K., awkward funny.”

Ms. Manu tried to turn up the humor after Mr. Trump was elected president. She failed.

Using clothing and shoes, she built a wall in Ms. Sanchez’s dorm room at Lindenwood University in St. Charles, Mo., and left a note saying, “Trump won so here is a little preview of what’s to come.”

Tearful and disturbed, Ms. Sanchez posted a photograph on Twitter that was shared more than 50,000 times. “I was angry,” she said. “I threw the stuff, and I tore the paper.”

Ms. Sanchez, along with campus security officers, confronted Ms. Manu, who appeared shocked that the gag had backfired. Ms. Manu declined to be interviewed. Ms. Sanchez speculated that online humor around presidential politics had led her friend to think of the election, and what was at stake, as a joke.

What kind of Nazi name is “Isabel Manu” anyway? Must be some skinny blue eyed blonde who hates all Women of Color.