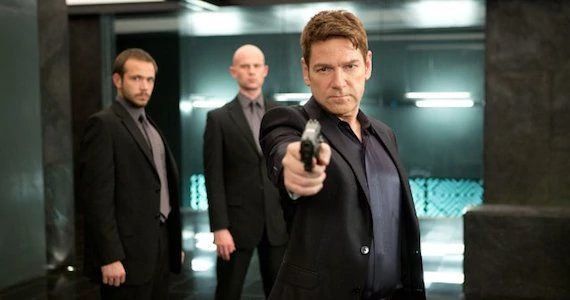 Movies these days tend to be extremely accurate visually about what the past looked like or would have looked like if people back then had more money and time to work on their looks (e.g., all the work put into, say, American Hustle to look like 1978-80).

But the kind of people who write about movies are generally pretty clueless about how people thought or behaved in the past. Cultural pundits today mostly absorb some generally acceptable lessons about the evil attitudes of the past and don't look for nuance.

Thus, from the New York Times:

THE movie “Jack Ryan: Shadow Recruit,” which opens in theaters this weekend, revolves around an American C.I.A. analyst first introduced in Tom Clancy’s 1984 novel “The Hunt for Red October.” The source material isn’t the only thing that’s a little creaky. Ryan’s destination is Moscow, his target a Russian businessman plotting to crash the American economy through a terrorist attack.

In portraying the diabolical oligarch Viktor Cherevin, Kenneth Branagh delivers his lines in the thick, menacingly slow accent that defines Eastern European baddies on screen: “You think this is game, Jack?”

Nearly 25 years after the Berlin Wall fell and marked the end of the Cold War, Hollywood’s go-to villains remain Russians.

That assumes that Russians were the movies' go-to villains during the Cold War, which was hardly true. An obvious example is the James Bond movies, in which the novels' original bad guys, the Soviet SMERSH agency, were replaced by the nonideological for-profit multinational SPECTRE.

In general, Cold War movie bad guys were far more often the CIA, the oil companies, the military-industrial complex, the rich, and so forth and so on. (Among powerful American institutions, the Marine Corps and the FBI spent a lot of money and effort schmoozing Hollywood to keep from being portrayed badly.) Overall, the Soviets didn't figure much in American entertainment, and when they did, were usually seen as not the real problem.

The use of the Soviets as bad guys tended to be a 1980s idiosyncrasy of a handful of out-of-the-closet conservative action stars (e.g., Sylvester Stallone) or writer-directors (John Milius — Red Dawn). Their anti-Communist movies were extremely controversial at the time since they were much more popular with the public than with the culturesphere.

In general, Hollywood saw the Nazis as having agency, while the Soviets did not. They were a mere unfortunate reaction to our own agency. That's not a wholly unreasonable interpretation of history, but you can see why it wasn't very stimulating for making movies, so there were few anti-Soviet movies.

Even then, it is difficult to recognize any sort of negative ethnic stereotyping of Russians of the type we see today. Throughout the Cold War, American culture producers tended to view Russians as a cultured people as seen in all the great Russian novels and plays of the pre-Communist era. Many of the Russians in the West during the Cold War were refugee aristocrats of impeccable manners: some became head waiters, others novelists (Nabokov).

While Soviets were seen as boring and badly dressed, Americans during the Cold War tended, if anything, to overrate Russian culture as more elegant than American culture. For example, the Bolshoi Ballet was hugely famous during the Cold War. Similarly, young Texan pianist Van Cliburn winning the Tchaikovsky Competition in Moscow in 1958 was gigantically famous at the time. Russian figure skaters and gymnasts were highly admired. Even the U.S. victory over the Soviet ice hockey team at the 1980 Olympics was seen as bumptious upstarts somehow knocking off a team that was far more elegant than the brutal North American style.

At the upper end of Hollywood prestige, note Dr. Zhivago, the second biggest grossing movie of the 1960s, which depicts Russians as soulful, literary, and romantic but sadly victimized by Stalin. The movie ends with a travelog of a giant new Soviet hydroelectric dam showing the bad times are over and progress is being made.

I suspect screenwriters and studio executives have deemed Russians to be politically safe villains. No advocacy group will protest.

E.g., Steven Spielberg thought Hindus were a safe set of villains in Indiana Jones and the Temple of Doom 30 years ago, but quickly discovered that he'd better go back to Nazis.

No foreign distribution deal will be nixed. Russian moviegoers here and abroad are probably inured to seeing themselves portrayed as Boris Badenovs on screen.

Why make a TV show about modern-day surveillance and wiretapping when you can do a Red-scare period piece and offend or provoke no one?

Still, it doesn’t make for as powerful drama as it once did.

If you grew up during the Cold War, you viewed Russians with a potent mix of hatred and fear, and felt in your gut that a nuclear war between our countries could erupt any second, obliterating everybody and everything. That’s why movies like “The Day After” and “Threads” were so visceral.

No, these were basically movies about how Ronald Reagan was going to blow up the world. It's funny how the gigantic Nuclear Freeze movement of the early 1980s is so forgotten that it doesn't even have its own Wikipedia page.

I doubt today’s teenage moviegoers are walking around with the same mixed-up feelings about the Russians. Ivan Drago, the Soviet-bred fighting machine who battled Rocky Balboa in 1985, may have been absurd but he was a fall guy for his time. Has our pop culture not moved beyond “Rocky IV”?

Once again, Stallone was notoriously out of step with the rest of Hollywood in the 1980s by making anti-Communist movies, from which he made lots and lots of money, much as Mel Gibson made lots of money off the Mexican-American market with The Passion of the Christ. And don't forget that Rocky IV still ends with Rocky Balboa negotiating world peace with the young new Soviet premiere.

Now, in defense of post-Berlin Wall Hollywood screenwriters, let me point out that they were faster at sniffing out that something funny was going on in Yeltsin's new free market democracy than was, say, Stanley Fischer.