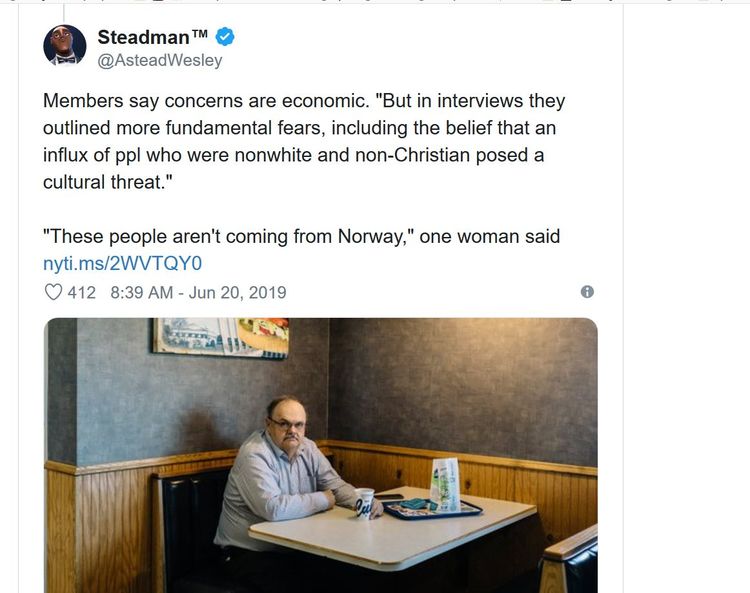 Members say concerns are economic. "But in interviews they outlined more fundamental fears, including the belief that an influx of ppl who were nonwhite and non-Christian posed a cultural threat."

"These people aren't coming from Norway," one woman saidhttps://t.co/o4O6rYzro2

How dare the citizens of St. Cloud, Minnesota express their opinions on whether or not ever more Somalis should be dumped on their town. That’s fascist! Democracy is citizens shutting up and doing as they are told by their superiors.

‘These People Aren’t Coming From Norway’: Refugees in a Minnesota City Face a Backlash

ST. CLOUD, Minn. — John Palmer, a former university professor, has always had a cause. For decades he urged Minnesota officials to face the dangers of drunken driving and embrace seatbelts. Now he has a new goal: curbing the resettlement of Somali refugees in St. Cloud, after a few thousand moved into this small city where Mr. Palmer has lived for decades.

Every weekday, he sits in the same spot at Culver’s restaurant — the corner booth near the Kwik Trip — and begins his daily intake of news from xenophobic and conspiratorial sites, such as JihadWatch.org, and articles with titles like “Lifting the Veil on the ‘Islamophobia’ Hoax.” On Thursdays, Mr. Palmer hosts a group called Concerned Community Citizens, or C-Cubed, which he formed to pressure local officials over the Muslim refugees. Mr. Palmer said at a recent meeting he viewed them as innately less intelligent than the “typical” American citizen, as well as a threat.

“The very word ‘Islamophobia’ is a false narrative,” Mr. Palmer, 70, said. “A phobia is an irrational fear.” Raising his voice, he added, “An irrational fear! There are many reasons we are not being irrational.”

In this predominantly white region of central Minnesota, the influx of Somalis, most of whom are Muslim, has spurred the sort of demographic and cultural shifts that President Trump and right-wing conservatives have stoked fears about for years. The resettlement has divided many politically active residents of St. Cloud, with some saying they welcome the migrants.

But for others, the changes have fueled talk about “white replacement,” a racist conspiracy theory tied to the declining birthrates of white Americans that has spread in far-right circles and online chat rooms and is now surfacing in some communities.

Such evil conspiracy theorists must be replaced.

“If we start changing our way of life to accommodate where they came from, guess what happens to our country?” said Liz Baklaich, a member of C-Cubed who unsuccessfully ran for St. Cloud City Council last year. She carries an annotated Quran in her purse. “If our country becomes like Somalia, there is nowhere for us to go.”

Minnesota’s biggest city, Minneapolis, has long struggled to incorporate a growing immigrant population into the city’s fabric, but the recent ascension of some former refugees into political power was taken as a sign of progress by many liberals. In central Minnesota, which is more conservative than the state’s urban centers, advocates for refugees fear that the resettlements could be met with more resistance.

Dave Kleis, the mayor of St. Cloud and a longtime Republican who now identifies as an independent, has voiced support for the resettlement program, but he has also drawn criticism for not forcefully denouncing groups like C-Cubed, which he refused to discuss in an interview. Mr. Kleis said the city was facing the same challenges as other parts of Minnesota and other changing communities around the country. St. Cloud, the state’s 10th-largest city, increased in population by 33 percent over the last 30 years, to roughly 70,000 people. The share of nonwhite residents grew to 18 percent from 2 percent, mostly with East African immigrants from Somalia, Kenya and Ethiopia, and the numbers of Somalis are estimated to grow.

Obviously, these racist xenophobes like Dr. Palmer deserve their replacement for being so deplorable as to subscribe to the conspiracy theory that the New York Times wants to replace them. It’s not that the NYT hates them and wants to see them chased down in their podunk town and demographically overwhelmed. It’s just that they deserve that fate.