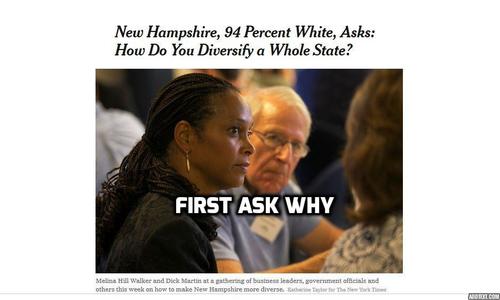 NYT: "New Hampshire, 94 Percent White, Asks: How Do You Diversify a Whole State?"

New Hampshire, 94 Percent White, Asks: How Do You Diversify a Whole State?

MANCHESTER, N.H. — Catalina Celentano used to hold training sessions for hospital workers in Lynn, Mass., to familiarize them with the cultures of patients from Cambodia, Russia and the Dominican Republic. When she moved to New Hampshire, she suddenly found herself in an ethnic vacuum.

I’m struck by how many journalistic effusions on the Need for More Diversity rely on quotes from professional diversicrats trying to drum up more business for themselves. Nobody seems to even notice the self-interest.

“I went from being able to speak Spanish every day to not speaking Spanish at all because there wasn’t anybody to speak Spanish to,” said Mrs. Celentano, who was born in Colombia to a Colombian mother and Hungarian father. “The only person I spoke Spanish with was a cleaning lady and she moved back to Colombia.”

New Hampshire, like its neighbors Vermont and Maine, is nearly all white. This has posed an array of problems for new arrivals, who often find themselves isolated and alone, without the comfort and support of a built-in community.

It has also posed problems for employers in these states, who find that their homogeneity can be a barrier to recruiting and retaining workers of different ethnicities and cultural backgrounds.

Diversity: the cause of, and solution to, all of life’s problems.

The issue prompted about 100 business leaders, government officials and members of nonprofit organizations to meet Thursday to search for ways that New Hampshire — which is 94 percent white — might lure other racial and ethnic groups, as well as younger people.

Will Arvelo, New Hampshire’s director of economic development, said the gathering appeared to be the first broad-based effort in New England, if not the country, to focus on how to diversify an entire state.

… The project grew out of informal talks over the last few years among a racially diverse coalition of people, including Mrs. Celentano, who say they want to change New Hampshire’s demographics.

That raises the question of whether Mrs. Celentano (right) is racially diverse.

She’s not exactly what the Canadians would call a Visible Minority.

But, she’s on the Diversity Gravy Train, and that’s all that matters.

The effort is so new that it has no name. But it is drawing important players.

… New Hampshire’s neighbors, Vermont and Maine, are 95 percent white, making northern New England collectively the whitest region in a nation where white residents make up just over 60 percent of the population, according to the census.

Northern New England does contain pockets that are less monolithic.

Something must be done!

… “We haven’t even talked about housing and transportation,” Mrs. Celentano, who used to teach cultural training in Massachusetts and is now a community relations specialist for Eversource, told the group. …

She said in an interview later that the lack of certain basic services also made settling in places like New Hampshire difficult for minorities. These include hair salons that cater to African-American women, she said, as well as restaurants and supermarkets that offer ethnic foods and stores that sell traditional clothing.

And then after the African-American hair stylists and Pashtun grocers arrive, they will need more African-American hair stylists to cut their hair and Pashtun grocers to sell them their food, and, in general, to keep them from being lonely. The More Diversity Treadmill is a perpetual employment scheme for people like Mrs. Celentano.
[Comment at Unz.com]