The NYT notices something I’ve harped on for about a dozen years:

If you went to the movies in 1946, when Latinos constituted barely 3 percent of the American population, you might have caught Carmen Miranda, reportedly the highest-paid woman in the world at the time, dancing with her improbably tall fruit hat. By the 1950s, Desi Arnaz graced network TV as a star of “I Love Lucy.”

But it was more likely that the Latino actors seen on big and small screens occupied a narrow range of stereotyped background roles.

Actually, after WWII, Hispanics tended to be, if anything, over-represented in movies. They were featured prominently in Latin Lover roles, such as Fernando Lamas, whose image lives on in his sailing buddy Jonathan Goldsmith’s Dos Equis beer commercial character “The Most Interesting Man in the World.” George Clooney’s uncle-in-law José Ferrer won the 1950 Best Actor Oscar for Cyrano de Bergerac. Ricardo Montalban was on the cover of Life Magazine in 1949. The best of the Latin actors, Anthony Quinn, had been working steadily since the 1930s and ascended to stardom in 1952, winning the Best Supporting Oscar playing Marlon Brando’s brother in Viva Zapata.

There was a lot of pro-Latin American propaganda and warm feelings during the 1940s in America, such as Mayor LaGuardia of NYC renaming Sixth Avenue the “Avenue of the Americas” in 1945. I imagine there were several reasons for this trend, including

- To encourage Latin America to side with the Allies rather than the Italians and Germans or sit it out like the Spaniards;

- With movie markets in Continental Europe cut off, Hollywood focused on cultivating the Latin American market.

Still, relative to the total population, the stardom of even a few prominent Latinos was culturally and statistically significant.

It would seem that way if you project today’s attempt to racialize Conquistador-Americans as an oppressed minority back on to the past. There’s a huge effort today to rewrite the past to make it seem like Latinos were treated like blacks in order to emotionally justify amnesty and affirmative action as reparations for white racism.

But 65 years ago, a white guy from Argentina was a white guy with a sexy accent, while a mestizo like Quinn was a Cliff Curtis-type who was popular in Hollywood because he could plausibly play an Arab or an Eskimo.

In general, being Latin deracialized individuals in mid-Century American eyes. For example, the color line in baseball wasn’t actually broken by Jackie Robinson in 1947, it was broken by several Cuban players for the Washington Senators in the late 1930s.

You’ve probably never heard their names, because it wasn’t a big deal at the time: there was some resistance to playing guys who were obviously part black, but mostly the Latin understanding that one drop of white blood makes somebody more or less white was applied to these ballplayers. Organized Latin lobbies like LULAC wanted Latins to be seen as white, so the Census Bureau stopped counting them in the 1950 and 1960 Census. Our crime statistics to this day mostly count Latinos as white.

In fact, terms like “white” and “nonwhite” probably confuse matters more than they help. Something like “core” v. “fringe” is more useful. In 1950 people felt it benefited them to seem more core American, while today they understand the advantages of seeming more fringe.

Today, Latinos make up 17 percent of Americans, but there has been little change in network television in the number of Latino lead actors and in Latino roles, according to a study, “The Latino Media Gap: A Report on the State of Latinos in U.S. Media,” released on Tuesday by Columbia University’s Center for the Study of Ethnicity and Race.

When roles calling for Latinos appear today, they tend to fit generations-old labels: the cop or the criminal, the illegal immigrant or the emotional sex kitten. During the 1994-1995 network TV season, 6 percent of Latinos on television were linked to a crime; from 2012 to 2013, 24.2 percent of all Latino TV actors played criminals. Behind the screen, the study found that no Latinos wrote network TV pilots in 2011 and 2012.

The nightly news on TV offers an even more limited view. During the 1995-2004 period, stories about Latinos, most of which focused on illegal immigration and crime, made up less than 1 percent of network news. There are no Latino anchors or executive producers on any top English-speaking network news programs, according to the study. 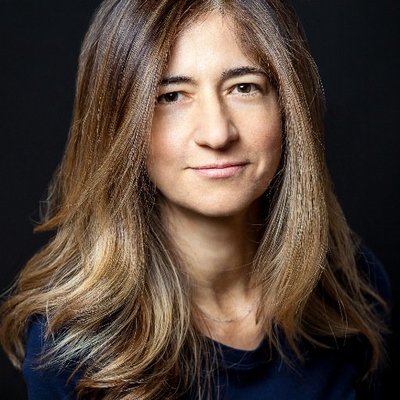 “The narrative that gets circulated in news is pretty much the narrative that Latinos are foreigners and somewhat threatening to America,” said Frances Negrón-Muntaner, [Pictured right]the lead researcher of the study and an assistant professor of English and comparative literature at Columbia. Latinos, she went on, “are only important in the news when they confirm something about our world that we already hold true — stories about illegal entry, for example, reinforce the idea that we don’t belong here.”

Or when Conquistador-Americanas like the (not very) Negron-Muntaner pen studies hyped in the New York Times about how they suffer under the lash of racial discrimination.

A notable finding in this new study is the sluggish growth in representation despite a fast-growing Latino population — and in particular of a fast-growing population of enthusiastic media consumers. Latinos, for example, buy 25 percent of all movie tickets in the United States and watch more hours of video online than the average American, according to Nielsen, the ratings company.

… Still, even as Latino consumer power grows, media presence seems to shrink. If diverse programming seems to give networks an advantage, why the disparity? The researchers for the study argue that in many media companies and networks, a significant majority of decisions are made by upper-class, middle-aged white men. The people responsible for hiring writers and actors look for people who are similar to themselves, hurting Latino representation, the study said. “In my interviews, I found that many people, consciously or not, are trying to preserve their privilege,” Ms. Negrón-Muntaner said. “People would say, ‘Oh, if we open up to tell new stories, then we’re displacing ones that are tried and true.’??”

Back in 1996, Marlon Brando went on the Larry King show to protest the mistreatment of two Mexican immigrants by the police and to encourage Hollywood executives to give more and better roles to Latinos, just as they had worked to boost the image of blacks during the Sidney Poitier Era. (Here’s the transcript.) You may remember the upshot of Brando’s attempt at raising Hispanic diversity sensitivity awareness among entertainment industry executives:

Los Angeles (Reuter) – The actor Marlon Brando, who sparked a storm of criticism for saying Hollywood was run by Jews, broke down and wept yesterday when he met Jewish leaders to apologise for his comments.

“It took 30 to 45 seconds before he was able to compose himself,” Rabbi Marvin Hier said of the Oscar-winning star of the Godfather, whom he met for three hours.

“Mr Brando broke down and cried … to show his affection for Lew Wasserman and other people who are his idols,” Rabbi Hier said, referring to the chairman emeritus of MCA, the parent company of Universal Pictures. Mr Wasserman had deplored Brando’s comments last week, but defended the actor as a friend of the Jews.

In an appearance on CNN’s Larry King Live last Friday, Brando said he was angry with some Jewish film-makers for not showing more sensitivity in portraying minority groups in a negative fashion while not portraying Jews in the same way.

“Hollywood is run by Jews. It’s owned by Jews and they should have a greater sensitivity about the issue of people who are suffering,” he said on the programme.