For the last decade I’ve largely been alone in pointing out that the Housing Bubble/Crash of the previous decade had quite a bit to do with George W. Bush’s 2002-2003 Increasing Minority Homeownership campaign. But while this has been been forgotten due to how it fits into neither party’s partisan narratives while also raising disturbing questions about America’s fattest sacred cow, Diversity, the evidence was laid out in a long news story in the New York Times in late 2008: 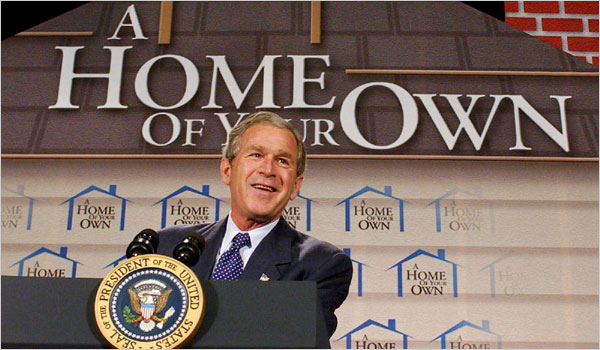 In June 2002, President Bush spoke in Atlanta to unveil a plan to increase minority homeownership.

“We can put light where there’s darkness, and hope where there’s despondency in this country. And part of it is working together as a nation to encourage folks to own their own home.”  President Bush, Oct. 15, 2002

Mr. Bush, according to several people in the room, paused for a single, stunned moment to take it all in.

Eight years after arriving in Washington vowing to spread the dream of homeownership, Mr. Bush is leaving office, as he himself said recently, “faced with the prospect of a global meltdown” with roots in the housing sector he so ardently championed.

There are plenty of culprits, like lenders who peddled easy credit, consumers who took on mortgages they could not afford and Wall Street chieftains who loaded up on mortgage-backed securities without regard to the risk.

But the story of how we got here is partly one of Mr. Bush’s own making, according to a review of his tenure that included interviews with dozens of current and former administration officials.

From his earliest days in office, Mr. Bush paired his belief that Americans do best when they own their own home with his conviction that markets do best when let alone.

He pushed hard to expand homeownership, especially among minorities, an initiative that dovetailed with his ambition to expand the Republican tent  and with the business interests of some of his biggest donors. But his housing policies and hands-off approach to regulation encouraged lax lending standards.

… But Mr. Hennessey did say he regretted that the administration did not pay more heed to the dangers of easy lending practices. And both Mr. Paulson and his predecessor, John W. Snow, say the housing push went too far.

“The Bush administration took a lot of pride that homeownership had reached historic highs,” Mr. Snow said in an interview. “But what we forgot in the process was that it has to be done in the context of people being able to afford their house. We now realize there was a high cost.”…

“No one wanted to stop that bubble,” Mr. Lindsey said. “It would have conflicted with the president’s own policies.” …

The president declined to be interviewed for this article. But in recent weeks Mr. Bush has shared his views of how the nation came to the brink of economic disaster. He cites corporate greed and market excesses fueled by a flood of foreign cash  “Wall Street got drunk,” he has said  and the policies of past administrations.

… But in private moments, aides say, the president is looking inward. During a recent ride aboard Marine One, the presidential helicopter, Mr. Bush sounded a reflective note.

Darrin West could not believe it. The president of the United States was standing in his living room.

It was June 17, 2002, a day Mr. West recalls as “the highlight of my life.” Mr. Bush, in Atlanta to unveil a plan to increase the number of minority homeowners by 5.5 million, was touring Park Place South, a development of starter homes in a neighborhood once marked by blight and crime.

Mr. West had patrolled there as a police officer, and now he was the proud owner of a $130,000 town house, bought with an adjustable-rate mortgage and a $20,000 government loan as his down payment  just the sort of creative public-private financing Mr. Bush was promoting.

“Part of economic security,” Mr. Bush declared that day, “is owning your own home.”

A lot has changed since then. Mr. West, beset by personal problems, left Atlanta. Unable to sell his home for what he owed, he said, he gave it back to the bank last year. Like other communities across America, Park Place South has been hit with a foreclosure crisis affecting at least 10 percent of its 232 homes, according to Masharn Wilson, a developer who led Mr. Bush’s tour.

“I just don’t think what he envisioned was actually carried out,” she said.

Park Place South is, in microcosm, the story of a well-intentioned policy gone awry.

Advocating homeownership is hardly novel; the Clinton administration did it, too. For Mr. Bush, it was part of his vision of an “ownership society,” in which Americans would rely less on the government for health care, retirement and shelter. It was also good politics, a way to court black and Hispanic voters.

But for much of Mr. Bush’s tenure, government statistics show, incomes for most families remained relatively stagnant while housing prices skyrocketed. That put homeownership increasingly out of reach for first-time buyers like Mr. West.

So Mr. Bush had to, in his words, “use the mighty muscle of the federal government” to meet his goal. He proposed affordable housing tax incentives. He insisted that Fannie Mae and Freddie Mac meet ambitious new goals for low-income lending.

Concerned that down payments were a barrier, Mr. Bush persuaded Congress to spend up to $200 million a year to help first-time buyers with down payments and closing costs.

This American Dream Down Payment Assistance Act that Bush signed in December 2003 was just a drop in the bucket, but I think it was politically significant in signaling that not just the Administration but also Congress was on board with lowering traditional credit standards for mortgages.

And he pushed to allow first-time buyers to qualify for federally insured mortgages with no money down. Republican Congressional leaders and some housing advocates balked, arguing that homeowners with no stake in their investments would be more prone to walk away, as Mr. West did. Many economic experts, including some in the White House, now share that view.

The president also leaned on mortgage brokers and lenders to devise their own innovations. “Corporate America,” he said, “has a responsibility to work to make America a compassionate place.”

And corporate America, eyeing a lucrative market, delivered in ways Mr. Bush might not have expected, with a proliferation of too-good-to-be-true teaser rates and interest-only loans that were sold to investors in a loosely regulated environment.

“This administration made decisions that allowed the free market to operate as a barroom brawl instead of a prize fight,” said L. William Seidman, who advised Republican presidents and led the savings and loan bailout in the 1990s. “To make the market work well, you have to have a lot of rules.”

But Mr. Bush populated the financial system’s alphabet soup of oversight agencies with people who, like him, wanted fewer rules, not more.

The president’s first chairman of the Securities and Exchange Commission promised a “kinder, gentler” agency. The second was pushed out amid industry complaints that he was too aggressive. Under its current leader, the agency failed to police the catastrophic decisions that toppled the investment bank Bear Stearns and contributed to the current crisis, according to a recent inspector general’s report.

As for Mr. Bush’s banking regulators, they once brandished a chain saw over a 9,000-page pile of regulations as they promised to ease burdens on the industry. When states tried to use consumer protection laws to crack down on predatory lending, the comptroller of the currency blocked the effort, asserting that states had no authority over national banks.

The administration won that fight at the Supreme Court. But Roy Cooper, North Carolina’s attorney general, said, “They took 50 sheriffs off the beat at a time when lending was becoming the Wild West.”

The president did push rules aimed at forcing lenders to more clearly explain loan terms. But the White House shelved them in 2004, after industry-friendly members of Congress threatened to block confirmation of his new housing secretary.

… Among the Republican Party’s top 10 donors in 2004 was Roland Arnall. He founded Ameriquest, then the nation’s largest lender in the subprime market, which focuses on less creditworthy borrowers. In July 2005, the company agreed to set aside $325 million to settle allegations in 30 states that it had preyed on borrowers with hidden fees and ballooning payments. It was an early signal that deceptive lending practices, which would later set off a wave of foreclosures, were widespread.

Andrew H. Card Jr., Mr. Bush’s former chief of staff, said White House aides discussed Ameriquest’s troubles, though not what they might portend for the economy. Mr. Bush had just nominated Mr. Arnall as his ambassador to the Netherlands, and the White House was primarily concerned with making sure he would be confirmed.

“Maybe I was asleep at the switch,” Mr. Card said in an interview.

Brian Montgomery, the Federal Housing Administration commissioner, understood the significance. His agency insures home loans, traditionally for the same low-income minority borrowers Mr. Bush wanted to help. When he arrived in June 2005, he was shocked to find those customers had been lured away by the “fool’s gold” of subprime loans. The Ameriquest settlement, he said, reinforced his concern that the industry was exploiting borrowers.

In December 2005, Mr. Montgomery drafted a memo and brought it to the White House. “I don’t think this is what the president had in mind here,” he recalled telling Ryan Streeter, then the president’s chief housing policy analyst.

It was an opportunity to address the risky subprime lending practices head on. But that was never seriously discussed. More senior aides, like Karl Rove, Mr. Bush’s chief political strategist, were wary of overly regulating an industry that, Mr. Rove said in an interview, provided “a valuable service to people who could not otherwise get credit.” While he had some concerns about the industry’s practices, he said, “it did provide an opportunity for people, a lot of whom are still in their houses today.”

In defense of Bush and Rove, they were Texans familiar with Texas’s reasonable home prices rather than with California’s outlandish home prices. In Texas, a boost in demand for homes leads to a spate of new supply within a year or so. But in California, a boost in demand sets off years of regulatory siege warfare during which prices spike.

For example, I did some research years ago intending to show that one of Bush’s political allies in his Increasing Minority Homeownership push—a black minister in the suburbs of Houston who had started his own housing tract for his congregation—turned into a disaster. But when I looked it up in 2009 or 2010, the people who had bought homes were largely doing okay, still making their payments. Why? Because these houses outside Houston had only cost $90,000.

Increasing Minority Homeownership isn’t at all a bad idea at $90,000 for a new house.