NYT: Everything That Ever Existed Is About Trump

Why this 19th-century master of the Hudson River landscape, who used his art to argue against industry’s assaults, is politically right for right now.

The Metropolitan Museum of Art’s new show, “Thomas Cole’s Journey: Atlantic Crossings” is gorgeous, politically right for right now, and a lesson in the mutability of art history.

It’s like how Alexander Hamilton was right for right now back in 2014 because he was a Caribbean immigrant and therefore an honorary Person of Color.

In the 1960s, pioneering scholarship in American art confirmed that Cole (1801-1848) was the nation’s first major landscape artist and progenitor of what would be called (though not by him) the Hudson River School. The fact that he was born in England and spent formative time in Europe was noted, without being particularly noticed.

In reality, most famous early American painters went back and forth between here and the British Isles.

Gilbert Stuart, who painted the George Washington portrait in your wallet was born in Rhode Island but spent 18 years in the British Isles early in his career before returning.

Benjamin West grew up in Pennsylvania but spent his last 57 years in England.

Boston-born John Singleton Copley did his best work in America, but in his mid-30s moved to England for the rest of his life.

Later, James McNeill Whistler, after Robert E. Lee had finally expelled him from West Point, spent most of his life in England.

John Singer Sargent was born to affluent American ex-pats in Florence and mostly lived in England, but turned down a knighthood to keep his American citizenship.

It’s almost as if Britain and America were part of a cultural sphere that we might call, say, the Anglosphere. Talented artists born in America or the British Isles tended to feel more or less at home culturally in the other.

The focus was on his identity as a Yankee romantic, the poetic advocate and spiritual protector of a New World Eden beset by industrial encroachments, with forests being mowed down for gain and railroads slicing the land.

When the 1990s brought an emphasis on art being viewed as unspiritual, unpoetical, socioeconomic evidence, the perspective on Cole changed. Considered within the framework of the Andrew Jackson presidency, which coincided with the high point of Cole’s career in the 1830s, the artist and his work were cast as reactionary, evidence of resistance to the era’s push toward democratic populism, urbanism and Westward expansion.

But now Ron Chernow and Lin-Manuel Miranda have enlightened us that the true democratic progressive wasn’t Andrew Jackson but (for complicated reasons that they have explained at vast profit to themselves) Alexander Hamilton, the grandson of a Scottish laird.

Cole was seen as aligning himself with the attitudes and interests of his wealthy patrons. His Eden was a gated rural estate from which the common man was shut out.

Through a 2018 lens, the perspective becomes still more complicated. Today, populism is being strategically used as a divisive political force. Environmental regulations are being stripped away. In a time of walls and deportations, Cole’s immigrant status — he became a naturalized United States citizen only after living here for 17 years — takes on new weight. Aspects of his conservatism begin to make sense.

It’s Cole the immigrant and internationalist that the show highlights.

… He put both to use in the 1934-36 [sic — the NYT means 1834] salon production called “The Course of Empire,” which, in five separate paintings, narrates the life-cycle of an unnamed civilization: from forest origins, to rural innocence, to prideful florescence, to destruction, to vanishing. 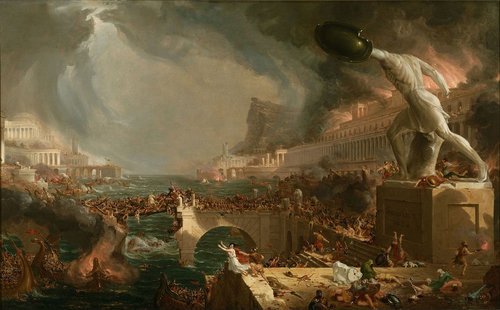 … And just as Cole is most realistically and revealingly seen and judged against the background of his time, so is the exhibition, coming as it does in this confounding MAGA moment.

Whew, the critic managed to drag in Trump at the very last moment.

Post
Biden Vows To Rip Out Roots Of Systemic Racism i.e. Seize The Equity In Your Home

Post
Minnesota Is Turning Into A Front In The Ethiopian Civil War
MORE...
POPULAR TAGS