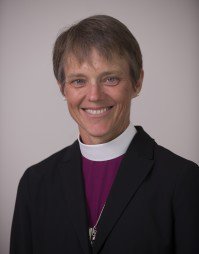 hat you take great pleasure reading the New York Times obituary page and noting the many terrible, destructive people who are dying off. One such enemy—a  terrible traitor to the historic American nation—is the late not so Right Rev. Edmond Browning.

Browning was the leader of the American Episcopal Church in the mid 1980s—1997.

"Edmond L. Browning, who as the presiding bishop in the United States welcomed women into the hierarchy of the Episcopal Church, supported a role for gay and lesbian congregants, and lobbied aggressively for civil rights and against the nuclear arms race, died on Monday at his home in Dee, Ore. He was 87.... “We are no longer a middle-class white church,” Bishop Browning said in statements at the time. “We are a church that is multicultural, and the leadership of the church is beginning to make that clear.”

He consecrated the church’s first female bishop (the Rt. Rev. Barbara C. Harris of the Diocese of Massachusetts in 1989); brokered a compromise with the worldwide Anglican Communion, based in Britain, that allowed individual dioceses to decide whether to ordain women; and commissioned a report that similarly left it to the discretion of local dioceses to ordain gay Episcopalians.”

I was raised in the Episcopal/Anglican church in the 1970s. Even in our hyper lib, university community in Chicago our Anglican/Episcopal priests were traditional Christians. They were married British American men who did not push trendy PC Marxist causes or force the worst feminist, sexual extremist perversions on the congregation. But,  with presiding bishop Edmond Browning the dam broke and when anything goes... everything goes.

I and many other VDARE.com  readers are taking some joy this day in knowing that Bishop Edmond Browning is spending eternity roasting in Hell.

Yes, the NYT Obituaries—maybe the only reason to read the New York Times.