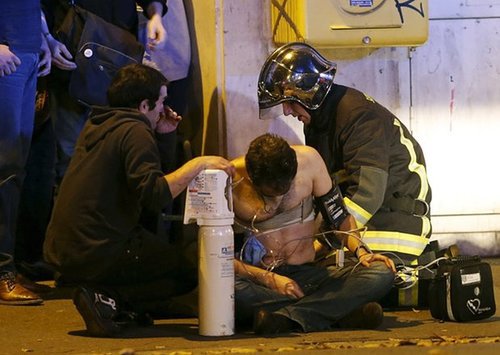 Yes, this is what I call MSM Backlash Libel—it’s obvious at this point that France isn’t being xenophobic enough.

The possibility that one of the attackers was a migrant or had posed as one is sure to further complicate the already vexing problem for Europe of how to handle the unceasing flow of people from Syria, Iraq, Afghanistan and elsewhere. It could also lend weight to the xenophobic arguments of right-wing populists like Marine Le Pen, the leader of the National Front party, who on Saturday held a news conference to declare that “France and the French are no longer safe.”

Hollande closed the French border for a while in response to the attack. This Tweet by Ann links to a Tweet from David Frum: “Maybe guard the border before the massacre.”

You should see the outpouring of perfervid hate directed at Frum in response. It’s not right-wing hate, it’s left-wing hate.

I’m afraid Frum’s position as a post-Conservative writer of the Atlantic means that his Twitter followers are “liberals”—which means that their response to a dissident Tweet looks like this:

Of course, these are all people who used to respect Frum for his "centrist" position on the abolition of American gun rights. You know, I think I prefer being on the Dissident Right to hanging around with people like that.