NY Post Able To Identify NYFD Problem, But Not Put "Cowardly Black Fireman" In The Headline 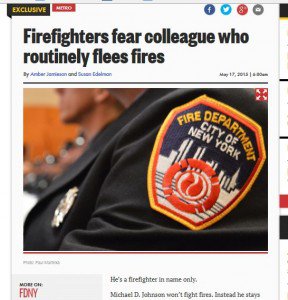 The NY Post, which John Derbyshire insists is America's actual newspaper of record, has a valuable and important exclusive about the dangers of Affirmative Action in the New York Fire Department. The only thing wrong with it is that you have to read well down into the story to find out what it's actually about.

The NYFD has a black  firemen's association called the Vulcan Society which has been suing to allow blacks who can't pass the entrance exam to be admitted. (On the usual grounds that if blacks aren't passing the test, the test must be biased.) A judge named Nicholas Garaufis believed them, and insisted that the NYFD admit what are known as priority hires. One of them is gentlemen named Michael D. Johnson who is afraid to fight fires. [Firefighters fear colleague who routinely flees fires, By Amber Jamieson and Susan Edelman, May 17, 2015] 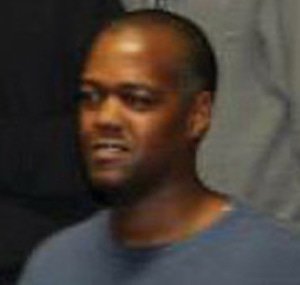 Here's what the story says about Johnson (pictured right)

He’s a firefighter in name only.

Michael D. Johnson won’t fight fires. Instead he stays on the sidelines as his Engine Co. 257 colleagues rush into burning buildings, FDNY insiders told The Post.

“To have a guy that you know to be afraid is not going to be there for you when you need him to be — it’s frightening,” said one FDNY source.

The latest fright unfolded April 2 at a three-alarm blaze on East 78th Street, when Johnson’s irked captain radioed a “mayday” after discovering Johnson was AWOL, sources said. He had been assigned as “backup” to the nozzle man carrying the hose into the burning two-story building.

That left just two firefighters — the first and a third — to haul the heavy hose up a long staircase and spray water on the flames.

A photo obtained by The Post shows Johnson at the curb next to a FDNY vehicle while fellow firefighters march up steps into a house engulfed in black smoke.

Johnson told his colleagues that he’d returned to the fire truck to refill his air tank, a source said.

But sources said he never entered the blaze and should not have run low on air.

“It can’t be ignored,” another department source said of the probie firefighter’s repeated absences. “If they ignore it, some civilian will end up injured or killed, or a fireman will be injured or killed.”

The other firemen, who are not afraid to fight fires, are afraid to publicly criticize Johnson:

But department members are afraid to openly complain or criticize Johnson, who is black, because he was hired under a court order to increase minority hiring in the FDNY.

Johnson, 41, a former city EMT who earned two medals on that job, was among 282 “priority hires” — applicants passed over in 1999 or 2000 as a result of discrimination, a federal judge ruled.

His June 2, 2014, graduation class of 286 probationary firefighters was hailed as the most diverse in FDNY history — 24 percent Hispanic, 17 percent black and with four women.

Okay, they can identify the fact that it's a black guy who has the problem, and that affirmative action is why nothing is being done about it, but they can't put it in the headline.