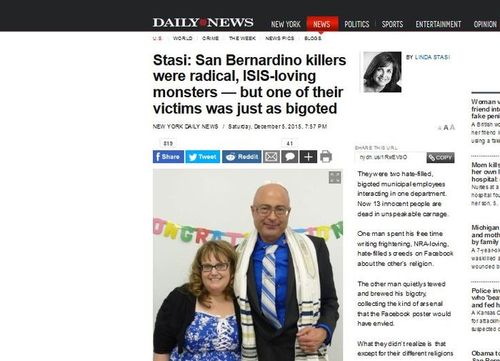 Stasi: San Bernardino killers were radical, ISIS-loving monsters — but one of their victims was just as bigoted

They were two hate-filled, bigoted municipal employees interacting in one department. Now 13 innocent people are dead in unspeakable carnage.

The other man quietly stewed and brewed his bigotry, collecting the kind of arsenal that the Facebook poster would have envied.

What they didn’t realize is that except for their different religions they were in many ways similar men who even had the same job….

The other man, the victim, Nicholas Thalasinos, was a radical Born Again Christian/Messianic Jew, who also connected with his future wife online and had traveled across the country to meet her.

The killer, however, became half of an Islamic Bonnie & Clyde, while the other died as the male equivalent of Pamela Geller.

The killers deserve every disgusting adjective thrown at them. And more.

But the victim is also inaccurately being eulogized as a kind and loving religious man.

Make no mistake, as disgusting and deservedly dead as the hate-filled fanatical Muslim killers were, Thalasinos was also a hate-filled bigot. Death can’t change that. But in the U.S., we don’t die for speaking our minds. Or we’re not supposed to anyway.

Thalasinos was an anti-government, anti-Islam, pro-NRA, rabidly anti-Planned Parenthood kinda guy, who posted that it would be “Freaking Awesome” if hateful Ann Coulter was named head of Homeland Security.

I’m guessing this isn’t a parody, although it’s possible that it is.

Assuming it’s not, have you ever noticed how often people who accuse other folks of being full of hate are really haters themselves?