An interesting new study has been published by a caliphate-supporting group, the Council on American Islamic Relations (CAIR) which notes the increase of mosques in the United States.

Below, the Islamic Center of America located in Detroit is the largest mosque in America 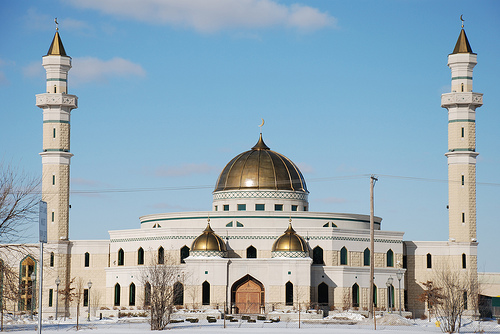 CAIR has made its report available online: The American Mosque 2011. It has a section titled Major Findings, from which I have pulled some noteworthy items:

• The number of mosques and mosque participants continue to show significant growth. The US Mosque Survey 2011 counted a total of 2,106 mosques; as compared to the year 2000 when 1,209 mosques were counted—representing a 74% increase from 2000.

• The American mosque is a remarkably young institution: over three-fourths (76%) of all existing mosques were established since 1980.

Obviously we citizens are doing something wrong if Muslim leaders think that America is compatible with totalitarian Islam.

Another nugget in the report is how 24 percent of Muslim leaders agree with the statement that “America is immoral.” Why do they choose to live in America when ummah territory is vast and diverse? Perhaps they would be happier in Riyadh or some other cheerful community where religious police enforce Mohammed’s morality.

Following is a chipper MSM article that reflects the idea that Islam is just another religion.

The number of American mosques grew by 74 percent in the past decade and are increasingly found in the suburbs, according to a national survey by a coalition of Muslim groups.

“This building boom is indicative of the growing financial resources of the Muslim community as many Muslims have lived in the U.S. for many decades now and their financial resources have improved,” wrote study author Ihsan Bagby, an associate professor of Islamic studies at the University of Kentucky.

Ravi Mohiuddin attends one of the Bay Area’s newer mosques, though as with many Islamic centers in the Bay Area, his West Valley Muslim Association in Saratoga is a work in progress.

The mosque opened in a rented hall in 2007 amid two insurance offices, a hair salon and lighting store. Just a mile from Apple headquarters, the storefront attracts Apple employees and other Silicon Valley Muslims who come for daytime prayers.

But the congregation has grown from a few dozen to hundreds, and Mohiuddin said adherents are raising money to build a mosque down the street.

Bagby pointed to several factors contributing to the growth: an influx of Muslim refugees from Somalia, Iraq, West Africa and Bosnia; increasing ethnic and denominational diversity within the Muslim community spurring new mosques reflecting different schools of thought; and the expansion of the Muslim population into suburbs and new regions around the country.

Many Muslim organizations don’t seek loans from financial institutions because of the Islamic ban on interest, so Bagby said followers have to increase their membership and confidence before building a mosque.

For Mohiuddin, geography was the biggest reason for launching the mosque in Saratoga.

Along with counting each mosque, researchers asked hundreds of imams and other mosque leaders about their religious practices, schools of thought and attitudes toward American society.

The poll is the first of its kind since similar surveys by the same group of researchers in 2001 and 2000. The new survey shows some perspectives have changed.

Only about 25 percent of mosque leaders believe American society is hostile to Islam, compared to 56 percent who thought so in 2000.

Mohammad Chaudhry is one of those who believes most Americans welcome their Muslim American neighbors.

The non-Muslim community helped rebuild his Islamic Center of the East Bay in Antioch after an arsonist gutted the mosque in 2007.

Congregations are increasingly diverse and busier with more people participating in weekly services, the survey says. Only African American mosques experienced a plateau or decline in attendance.

“People of all denominations come here,” Chaudhry said. “The Sunnis come, the Shiias come. Muslims from India, Muslims from Pakistan, some from the Middle East, some from Africa, a few from Afghanistan.”

Most mosques are of the Sunni tradition, but the West Coast has the largest number of Shiite mosques. About 1 percent of mosque leaders said they followed the fundamentalist Salafi school, a strict, literalist interpretation of the Quran, and most of those headed African American congregations.

Although the Muslim population has grown, it remains a tiny fraction of the American population.