Now Why Would Blacks And Hispanics Have More To Fear Than Whites From Armed Teachers? Because They're More Likely To Attempt To Murder One. 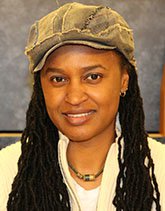 Well, that didn’t take long. The Washington Post permits a university professor to tell us why arming teachers is a bad idea: “Arming teachers would put black and Latino kids in danger.”

Now why would that be?

The professor is Stacey Patton (right)  an "assistant professor of multimedia journalism at Morgan State University and the author of Spare The Kids: Why Whupping Children Won’t Save Black America.”

Answer? Not long, because a lot of teachers, particularly whites, do fear for their lives in predominantly black schools.

Those children are the ones who always feel the brunt of policing inside and outside of schools. Most high-profile mass shootings have been committed by white men, but metal detectors, school police and armed guards are disproportionately placed in public schools with majority black and other nonwhite students, along with locked gates, random sweeps, and a host of other surveillance and security measures to maintain control in their schools. Research shows that such practices foster hostile environments that have contributed to racial disparities in school suspensions, expulsions and arrests leading to the “school-to-prison pipeline,” by pushing more students of color out of school and into the juvenile justice system.

One report last year found that “school resource officers, who essentially function as law enforcement personnel, are more likely to be deployed on campuses with large numbers of black students.”

Nice try there, professor, but pinning the violence endemic in “urban” schools on whites won’t fly. And you know it.

So again, the question: Why are cops “more likely to be deployed on campuses with large numbers of black students?”