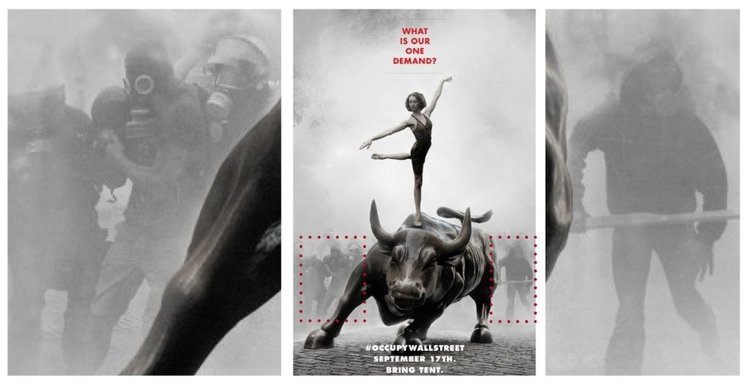 Not The Ukraine: The Ignominious Failure Of Occupy Wall Street

In light of the events in Kiev, it's worth looking back on the ignominious failure of Occupy Wall Street, which was restricted to an unstrategic small park rather than, say, Times Square, and was eventually broken up by Mayor Bloomberg's cops with little fuss. Notice in the background the promise of street rioting: to the right, a hooded brawler brandishing a table leg as a club, to the left what appear to be riot cops grappling with fighters. The stout lads who carried off the coup in Kiev would find this imagery galvanizing.

On the other hand, the centerpiece is an unintentionally comic depiction of superior feminine cultural refinement rising above masculine capitalism.

Uh ... the reason New York is the ballet capital of America is because of all the money generated by Wall Street. So, a struggle promising street fighting over who has better aesthetic taste — the people who make the money made on Wall Street or the people who spend the money made on Wall Street — wasn't ever really going to go anywhere. In the battle between the ballerinas and the Masters of the Universe, there will never be a final victor because there's way too much fraternizing with the enemy.

And the text "What is our one demand?" attracted process-oriented protesters whose endless yakking about what our one demand should be bored and repelled the left hooligans who might have created a few iconic martyrs by provoking the cops into over-reaction.

(By the way, Arturo di Modica's Charging Bull sculpture is probably the most popular piece of guerilla street art of the last generation: the sculptor secretly plopped it down in front of the New York Stock Exchange late one night in 1989. The authorities initially hauled it off, but popular opinion demanded it be made permanent. Money-loving Chinese tourists have developed the tradition of rubbing its now shiny testicles for good luck.)