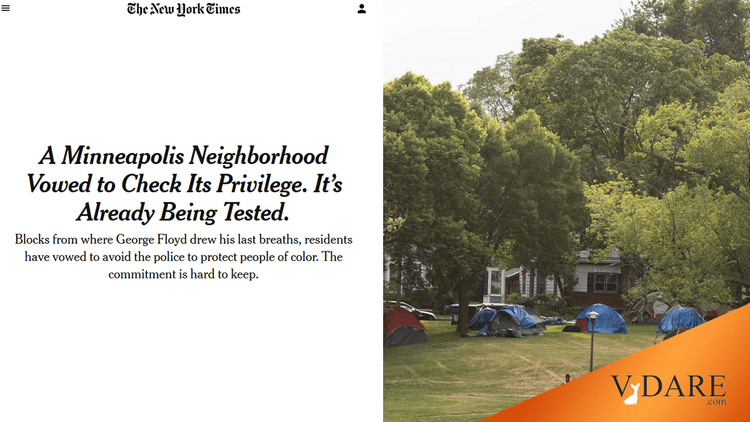 Not from the Babylon Bee: White Minneapolis Neighborhood Won't Call The Cops On Blacks Even If They're Pointing Guns

Not from the Babylon Bee but from the New York Times news section:

A Minneapolis Neighborhood Vowed to Check Its Privilege. It’s Already Being Tested.

Blocks from where George Floyd drew his last breaths, residents have vowed to avoid the police to protect people of color. The commitment is hard to keep.

MINNEAPOLIS — … After the death of George Floyd at the hands of the police, Ms. Albers, who is white, and many of her progressive neighbors have vowed to avoid calling law enforcement into their community. …

Two weeks ago, dozens of multicolored tents appeared in the neighborhood park. They were brought by homeless people who were displaced during the unrest that gripped the city. The multiracial group of roughly 300 new residents seems to grow larger and more entrenched every day. …

The video of Mr. Floyd’s death and the outcry over racial injustice that came after has awakened many white Americans to a reality that people of color have known their whole lives: The scores of police killings they have seen in the news in recent years were not one-off incidents, but part of a systemic problem of the dehumanization of black people by the police.

Obviously, that’s the only possible explanation for the deaths of George Floyd, Rayshard Brooks, and Ahmaud Arbery.

… “I’m not being judgmental,” said Carrie Nightshade, 44, who explained that she no longer felt comfortable letting her children, 12 and 9, play in the park by themselves. “It’s not personal. It’s just not safe.”

On Friday, she sat in a shared backyard with four other women who live in neighboring houses. The women, four of whom are white, had called a meeting to vent about the camp.

Angelina Roslik burst into tears, explaining that she had spent the past four years fleeing unstable housing conditions and was struggling more than she cared to admit with the chaos the camp had brought into the neighborhood. Linnea Borden said she had stopped walking her dog through the park because she was tired of being catcalled. “My emotions change every 30 seconds,” said Tria Houser, who is part Native American.

The women agreed to let any property damage, including to their own homes, go ignored and to request a block party permit from the city to limit car traffic. Rather than turn to law enforcement if they saw anyone in physical danger, they resolved to call the American Indian Movement — a national organization created in 1968 to address Native American grievances such as police brutality — which had been policing its own community locally for years.

That’s like the scene in Straight Outta Compton where N.W.A. is breaking up, so Ice Cube hires the Black Muslim’s Fruit of Islam to be his enforcers, while Easy-E and manager Jerry Heller sign up the Jewish Defense League as their goon squad.

But some people in the neighborhood have already found their best-laid plans to avoid calling the police harder to execute than they had imagined. …

Mitchell Erickson’s fingers began dialing 911 last week before he had a chance to even consider alternatives, when two black teenagers who looked to be 15, at most, cornered him outside his home a block away from the park.

One of the boys pointed a gun at Mr. Erickson’s chest, demanding his car keys.

Flustered, Mr. Erickson handed over a set, but it turned out to be house keys. The teenagers got frustrated and ran off, then stole a different car down the street.

Mr. Erickson said later that he would not cooperate with prosecutors in a case against the boys. After the altercation, he realized that if there was anything he wanted, it was to offer them help. But he still felt it had been right to call the authorities because there was a gun involved.

Two days after an initial conversation, his position had evolved. “Been thinking more about it,” he wrote in a text message. “I regret calling the police. It was my instinct but I wish it hadn’t been. I put those boys in danger of death by calling the cops.”

What about the fact that the boys had put his life in danger?

“Yeah I know and yeah it was scary but the cops didn’t really have much to add after I called them,” he replied. “I haven’t been forced to think like this before. So I would have lost my car. So what? At least no one would have been killed.”