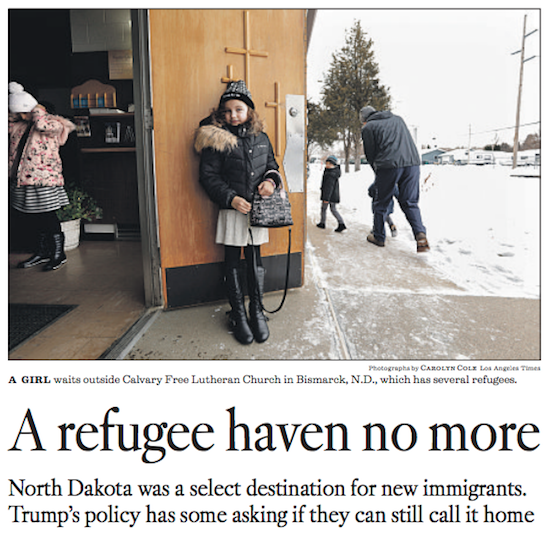 In fact, the only thing that has changed is that Trump increased freedom for local communities to opt out of refugee resettlement if they wish.

Interestingly, the great majority of the asylum seekers have turned out to have fake claims: Their acceptance rate has fallen to less than one percent. So the already squishy category of Victim immigrants has shown itself to be worthy of suspicion among Americans who are paying attention.

Plus, on a planet approaching 8 billion residents, America cannot be the welfare office for all the needy. People need to stay home and work for reform, as once was the norm before cell phones and easy transit.

The Times should be ashamed of an article where the city being discussed is misspelled once ("Bismark"!) and it reports Trump said “many refugees are criminals” which is not accurate — though he may have said “some” which is certainly true. 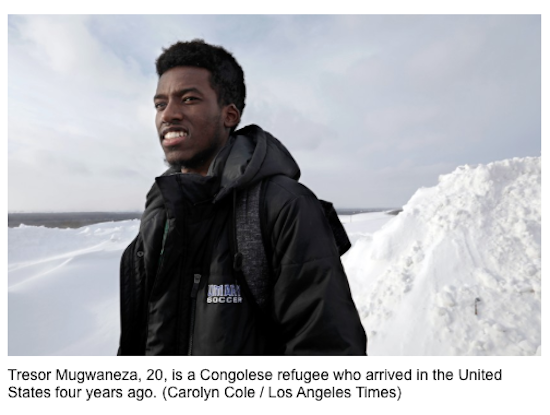 BISMARCK, N.D. —  For decades, this conservative, predominantly white capital city has played host to refugees from around the world.

Immigrants greet shoppers at Walmart, process beef at the Cloverdale Foods plant, run the register at Arbys, clean the Holiday Inn and drive for Uber.

Nobody used to pay them much mind.

“Life was getting better,” said 20-year-old Tresor Mugwaneza, who settled here four years ago after fleeing war in the Democratic Republic of the Congo and eventually enrolled at the University of Mary.

Things started to change with the 2016 election of President Trump, who has suggested that many refugees are criminals and has extolled his belief in putting “America first” by drastically reducing the number allowed to enter the United States.

The rhetoric has trickled down from Washington into smaller, quieter parts of the nation, as citizens and local politicians embrace it and places such as Bismark start to reassess their relationship with the newcomers.

Now, because of a federal policy announced in September, the 49 states and 600 counties that have welcomed refugees — only Wyoming has never taken part in federal resettlement efforts — each have the power to decide whether to continue doing so.

Just a year ago, the biggest controversy in Bismarck — home to most of the 95,000 people in Burleigh County — was whether to allow the construction of a wind farm. That was nothing compared to the debate that erupted over immigrants.

Suddenly, on the cusp of winter, when life quiets down and temperatures may stay below zero for days at a time, it seemed refugees were all that residents could talk about.

“These people come and destroy everything they touch,” said a post on a local Facebook group, Bismarck’s People Reporting News, which gained thousands of members and became an outlet for concern as well as fear and misinformation.

The mayor, Steve Bakken, became a leading proponent of closing the door on more refugees, arguing that homeless veterans need help more than those fleeing war on another continent.

“If we can’t meet the needs of people here, why bring new ones in?” he said in an interview. (Continues)