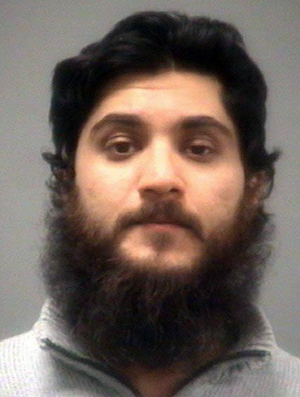 Today’s refutation of that ridiculous idea is a Pakistani-born man who lived in Cary, North Carolina, one Basit Javed Sheikh. He was arrested on his way to the war zone in Syria to help his buds in al Qaeda. He could just as easily have blasted a nearby shopping mall.

While living in the Tar Heel state, Sheikh showed his gratitude to America by posting jihadist material on his Facebook page, including at least one showing deceased US soldiers according to a video news report.

That report also said a prison term could be followed by three years supervised release. Say, what’s wrong with deporting him to his dear Pakistan where jihad is a popular activity? Naturalized citizens are deported, in particular if they become members of subversive groups, like al Qaeda.

Sheikh had a job at the local Post Office (where starting pay is $21/hour and the average worker makes $72K annually).

What, don’t Americans want to work in the Post Office any more? Must we import hostile jihadist Muslims to do decent-paying jobs these days?

Why permit Muslim immigration at all? There is no benefit to Americans, only increased danger from terrorists.

RALEIGH — A Cary man is facing a federal charge that he attempted to aid a foreign terrorist organization, according to a criminal complaint filed by the FBI in federal court last week.

Basit Javed Sheikh of Cary is suspected by the FBI of trying to provide support to the Nusra Front that is fighting in Syria’s civil war. His father, Javed Sheikh, said on Monday there “is no truth in that,” referring to the federal allegations.

But a federal grand jury in Raleigh believed there was enough evidence to indict Basit Sheikh to stand trial for the charges. He was being held by Wake County authorities on Monday, according to county records.

Law enforcement intercepted Basit Sheikh on Nov. 2 at Raleigh-Durham International Airport, an FBI affidavit states. He had told a confidential FBI source that he wanted to join the jihad, or holy struggle, in Syria, according to an agent’s affidavit. He said in August that he had secured a job “with a brigade in logistics, managing medical supplies,” the document states.

Sheikh, 29, is a listed resident of 300 Swansboro Drive in the Park Village subdivision. The home near Cary’s western border is owned by the suspect’s father, according to county records.

Basit Sheikh is originally from Pakistan and is a legal permanent resident of the United States, according to an FBI affidavit. He also has lived in the Republic of Seychelles, an island nation in the Indian Ocean, from 1992 to 2000, according to immigration files.

The FBI document, filed Nov. 4 in the Eastern District of North Carolina’s federal court, also documents online posts about jihad, an interview with a Taliban leader, and mujahedeen fighters in Syria – among other topics – from Facebook accounts believed by the FBI to be controlled by Sheikh, according to the document. He used the name “Abdul Basit,” the affidavit states.

“Yes we will return Home …# Not alone … #With an army to free our (imprisoned) brother’s & Sisters,” Sheikh posted on a link to an article about the influx of foreign fighters to Syria.

The social network has shut down his accounts several times.

The suspect “sought out” the relationship and told the source about his desire to leave the country, his interest in Syria and his approval of the mujahedeen, the record states. He told the source that he would join a group called Ahrar al-Sham, described in the affidavit as a coalition of Islamic and Salafist fighters against the regime of Bashar Assad.

Sheikh apparently made three or more attempts to join the Syrian civil war, according to the FBI affidavit. He traveled in fall of 2012 to Turkey, which neighbors Syria, and joined the Free Syrian Army. But he left the next month because he was disheartened by the rebel group’s supposed interest in money, he told the FBI source, according to the affidavit.

His second attempt came on Sept. 5. He booked a one-way flight to Istanbul for the next day, but did not show up at the airport for his flight, according to the affidavit. He held off because he couldn’t reach his contact in Turkey, and he “could not muster the strength to leave his parents,” the affidavit states.

But the desire to leave apparently remained, according to court records. Sheikh told the federal source that “he would not feel good about himself and would continue to feel like a hypocrite until he went on jihad,” in part because luxuries and comfort were weakening his intentions, the federal affidavit states. He wanted to die a martyr, he allegedly told the source.

About three weeks after his aborted flight, records state, the FBI source led Sheikh toward his arrest. The source put Sheikh in touch with “a trusted brother,” supposedly with the militant group Jabhat al-Nusra, who was in fact a covert FBI employee.

Sheikh told the FBI employee that he was interested in helping via “logistics, media, fight too, God willing,” the affidavit states. Jabhat al-Nusra is an alias for the Nusra Front, which itself has been declared by the federal government an affiliate of “al-Qaida in Iraq,” putting it under the U.S. Department of State’s “terrorist group” designation.

Sheikh arrived on Nov. 2 at RDU for a flight through Canada to Turkey and Lebanon, the affidavit states, believing that his contact could smuggle him from Lebanon into Syria. He had checked one bag and made his way through the security checkpoint when one or more law enforcement officers escorted him away for questioning.

One court record portrays Sheikh as both unfocused and dangerous to justify his detention without bail. Since his arrest, testimony has indicated that “the Defendant lacks focus and sits in front of the computer all day,” according to a detention order.

It is not clear whether Sheikh had a job. He was described in an arrest report as an employee of a post office, but he is not an employee of the U.S. Postal Service, according to a spokeswoman for the service.

Combining that description with “strong” testimony that Basit Sheikh intended to aid the Nusra Front, a judge determined that Sheikh was a flight risk and “an unacceptable danger” to the community.

He was being held without bond, according to Wake County records. If convicted, he faces a maximum penalty of 15 years imprisonment, a $250,000 fine and three years of supervised release, according to the U.S. Department of Justice.

“As this point in time, we are not in a position to speak,” Javed Sheikh said.

Defusing mistrust
Thomas Walker, the U.S. attorney for the Eastern District of North Carolina, which includes Wake County, stressed Monday that “this is an indictment for an individual for individual conduct, and should in no way be seen as a charge against anyone else.”

For the past year and a half, federal agents across the state have reached out to Muslim leaders in the Triangle and beyond in an effort to build a bridge of trust.

Khalilah Sabra, director of Immigration and Civil Rights at the Muslim American Public Affairs Council, confirmed Monday that federal agents had reached out to Muslims in the Triangle to try to foster a new mutual understanding, and to talk about the U.S. State Department’s list of suspected terror groups.

“From what I understand about the most recent case, it is an isolated incident,” Sabra said Monday.

The agents have been trying, in part, to defuse an atmosphere of suspicion and mistrust that developed in the local Muslim community following the arrests in 2009 of what prosecutors described as a home-grown terror cell based in Johnston County.

Federal prosecutors contended that agents found almost two dozen weapons and thousands of rounds of ammunition on the home of Daniel Patrick Boyd. A group of eight men were accused of trying to commit terror overseas and at a Marines base near Washington, D.C.

The case highlighted the government’s increasing use of confidential informants to build a slew of domestic terror cases since 9/11 that result in convictions, but raise questions for some Muslims about who they can trust.

Seven of the eight accused in that case are in prison now on a range of charges that include conspiring to provide material support to terrorists.