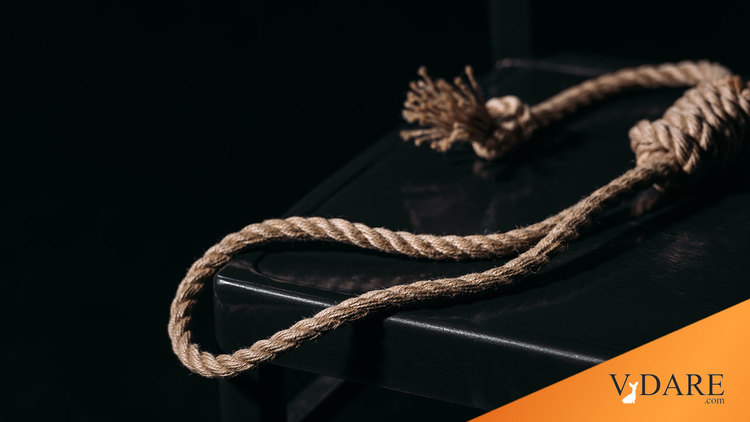 After the Jena Six brouhaha last year, the nation was swept by a frenzy of noose-sightings. Every day, the press brought us the latest noose news to alarm us that The Noose Was Loose in America!I want to thank the numerous readers who emailed me stories about the most publicized of the many noose incidents, that of Columbia U. Teachers College professor Madonna G. Constantine, a black woman who said she found a noose on her doors. They all said her story smelled like a hoax.

A professor at Columbia University’s Teachers College who was propelled into the national spotlight when a noose was found on her office door last fall has been found to have plagiarized the work of a former colleague and two former students, the college has announced.

The college, in statements to the faculty and the news media, said an 18-month investigation into charges against the professor, Madonna G. Constantine, had determined there were “numerous instances in which she used others’ work without attribution in papers she published in academic journals over the past five years.” ...

Dr. Constantine, in an e-mail message to faculty and students on Wednesday, called the investigation “biased and flawed,” and said it was part of a “conspiracy and witch hunt by certain current and former members of the Teachers College community.”

“I am left to wonder whether a white faculty member would have been treated in such a publicly disrespectful and disparaging manner,” she wrote.

She added, “I believe that nothing that has happened to me this year is coincidental, particularly when I reflect upon the hate crime I experienced last semester involving a noose on my office door. As one of only two tenured black women full professors at Teachers College, it pains me to conclude that I have been specifically and systematically targeted.” ...

Dr. Constantine, a professor of psychology and education who specializes in the study of how race and racial prejudice can affect clinical and educational dynamics, came to Teachers College in 1998 as an associate professor and earned tenure in 2001.

In 2006, the chairman of Dr. Constantine’s department, Suniya S. Luthar, passed along to administrators complaints that Dr. Constantine had unfairly used portions of writings by a junior colleague, Christine Yeh, as well as a number of students, Dr. Luthar said in an interview. Teachers College eventually asked Hughes Hubbard & Reed, a law firm, to investigate.

Dr. Yeh, who is now at the University of San Francisco, said in an interview Wednesday that she had left Teachers College in part because of her differences with Dr. Constantine. She called the college’s determination that there had been plagiarism “an important first step.”

“I’m really hopeful other people will come forward now,” she said. “When the initial charges were made, there were many students involved who didn’t feel they could follow up. They were too scared, and they were afraid of retribution.”

Dr. Yeh said that some of her work that had been copied concerned “indigenous healing,” or alternative methods, like acupuncture and Santeria, of dealing with medical and spiritual ailments. She said she has specialized in that subject for years.

Mr. Giacomo [Constantine's lawyer] said that he and his client met with lawyers from Hughes Hubbard in August and that Dr. Constantine was confronted with 36 passages from her work, and similar passages from the work of others, mostly Dr. Yeh’s. He said Dr. Constantine had subsequently submitted documentation showing that the passages were her own “original work,” and “related back to prior works she had done.”

“We thought that was the end of story; we thought there was no way that they could overlook the documentation that we had presented,” he said.

In October, a noose was found on Dr. Constantine’s office door, prompting the police investigation and student protests at Teachers College, which cherishes its image as a bastion of multiculturalism. In January, Mr. Giacomo said, the college’s president and provost told Dr. Constantine that the investigation into her writings had concluded that she had used the works of others without attribution, but that if she agreed to resign, the report would not be publicized.

Mr. Giacomo said that despite objections and further documentation, the college did not change its position. He said he now considered it “not a stretch of the imagination” to suspect the noose was “an additional way of intimidating my client.”