>Raza-friendly media like the New York Times tries to claim that illegal Mexican immigration has slowed to zero (very doubtful), but often find it convenient to ignore unlawful crossers from everywhere else on the globe.

Below, Hondurans await a Mexican train going north to the US. 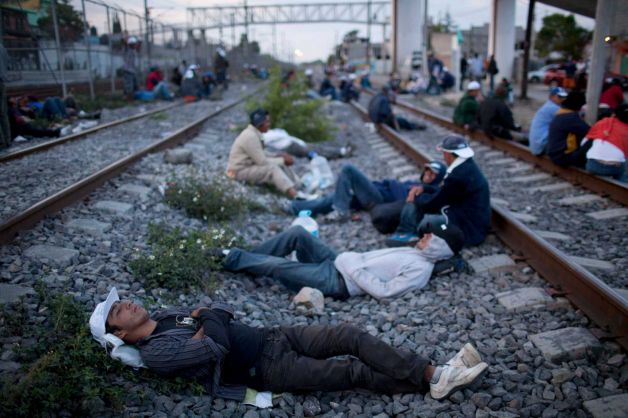 Central Americans keep coming, because their countries really are dirt-poor (unlike wealthy Mexico) and often violent. The AP article following notes that Honduras is the most murder-prone country on earth, no small achievement in a field with so many serious contenders. We can expect that Hondurans will bring that violent aspect of their national culture with them, even as they complain about it at home.

The story claims that many Hordurans are leaving because of “rising violence brought by the spread of Mexican drug cartels” but the country has been very violent for a long time as indicated by the chart below.

Per liberal script, the illegal aliens suffer greatly on their long odyssey through dangerous Mexico on their way to steal American jobs.

TULTITLAN, Mexico (AP) — Deported from the United States after years working construction in New Jersey, Hector Augusto Lopez decided to rebuild his life in his hometown in eastern Honduras.

He found a steady job in a shoe store in Catacamas. Then, in March, he watched horrified as robbers shot three customers to death before his eyes. Soon after, he decided to make the hard and dangerous journey north again.

“In Honduras there is a lot of violence, a lot of robberies and a lot of poverty,” Lopez, 28, said as he waited to jump a cargo train just outside Mexico City on a recent afternoon. “There is no future there.”

Half a block away, dozens more U.S.-bound Central American migrants waited outside an overflowing one-story, crammed shelter, napping on pieces of cardboard, wrapping themselves in garbage bags against the cold and trading stories about their journeys north.

While the number of Mexicans heading to the U.S. has dropped dramatically, a surge of Central American migrants is making the 1,000-mile northbound journey this year, fueled in large part by the rising violence brought by the spread of Mexican drug cartels. Other factors, experts say, are an easing in migration enforcement by Mexican authorities, and a false perception that Mexican criminal gangs are not preying on migrants as much as they had been.

Central American migration remains small compared to the numbers of Mexicans still headed north, but their steeply rising numbers speak starkly to the violence and poverty at home. The perils of the journey have pushed smuggling fees as high as $7,000, as much as double the earlier rates, for a trip that takes weeks, or even months for those delayed by robberies, health problems or difficulties finding transportation.

“The reality is that a lot of Mexicans have sort of given up looking for work in the U.S. and have started to return home but for Central Americans the conditions may be even more desperate that the ones we’re seeing in Mexico,” said David Shirk, director of the Trans-Border Institute at the University of San Diego.

About 56,637 non-Mexican migrants, most of them Central Americans, were detained by the U.S. Border Patrol along the border with Mexico between October and May. That’s more than double the 27,561 detained in the same period a year ago. Meanwhile, the number of Mexican migrants caught at the U.S. southern border decreased 7 percent this fiscal year, to 188,467.

In fact, the illegal migration of Mexicans to the United States now stands at its lowest level in decades, according to a study released in April by the Washington-based think tank the Pew Hispanic Center. The study found that over the last five years more Mexicans have left the United States than entered it.

Much of the drop is attributed to a weak U.S. economy, which has principally shrunk the number of construction jobs attractive to Mexican workers. Increased deportations, heightened U.S. patrols and violence along the border, as well as Mexico’s declining birth rate, also have played a role.

When it comes to Central Americans, the picture is starkly different.

U.S. apprehensions of illegal migrants, including Central Americans, began declining in 2007, when the flow of illegal migrants began slowing, but experts say that has reversed as violence rises in Central America, partly fueled by Mexican drug cartels moving into the area. Although Mexican authorities have pulled back on some immigration enforcement, they also have been apprehending more illegal Central American immigrants before they get to the U.S. border, with 29,619 arrested between January and April, a 42 percent increase from 2011, according to the country’s National Immigration Institute.

Officials at the U.S. Customs and Border Protection did not respond to repeated requests for comment.

“We hadn’t seen this amount of people in at least four years,” said Sister Leticia Gutierrez, director of a Mexican Catholic bishops ministry that coordinates 54 migrant shelters across Mexico where Central Americans make up almost all the client population. “People keep coming, and coming, and coming, so much so that we’re scrambling to help those who arrive to the shelters because we run out of the few things we have to give them after the first trains of the day arrive.”

Most hop on freight trains heading to the border with Texas, which is the closest U.S. spot from Mexico’s southern border, and the most dangerous route.

As they head north on the sun-scorched trek, the migrants often pay off thieves, immigration officials, police and railroad employees. They also have to cross territory controlled by the Zetas gang, which has increasingly targeted migrants, kidnapping them for ransom or holding them for forced labor.

The Zetas massacred 72 migrants in the summer of 2010 in the northern state of Tamaulipas, across the border from Texas. Nine months later authorities in Tamaulipas unearthed 193 bodies from clandestine graves after security forces said they were led to the site by Zeta members who confessed to kidnapping and killing bus passengers, many of them migrants.

“This (was put in place) in response to requests from these organizations and the governments of these countries, but it also reflects the fact that we think it is also appropriate for the safety of immigration agents,” Beltran del Rio said.

Last year, rights activists reported that the Zetas were at times kidnapping up to 50 migrants in one swoop, often in complicity with immigration officials.

Activists say the lack of mass abductions has persuaded some migrants that things are better in Mexico. Nonetheless they warn that migrants are still putting themselves at risk.

“Now they are kidnapping two or three migrants at a time and in remote areas of central Mexico, where there aren’t as many migrant shelters and where the kidnappings get no media attention,” said Ruben Figueroa, a migrant rights activist in the southern state of Tabasco.

In the latest massacre attributed to the Zetas, 49 decapitated bodies with their feet and hands cut off were dumped in May on a Nuevo Leon state road about 75 miles south of the Texas border. Authorities have not ruled out the possibility that the victims were also U.S.-bound migrants. Without recent reports of mass kidnappings, the victims may have been some of those kidnapped in small groups over recent months.

The dangers aren’t due only to criminals. Hundreds of Central American migrants were stranded in southern Mexico in late June after a rail bridge collapsed blocking the passage of cargo trains used by travelers heading to the United States.

Some of the migrants are continuing their journey north on foot or hitching rides in trailer trucks and other vehicles, migrants rights activists and Mexican authorities said.

Manuel de Jesus Chavez, a 16-year-old from Copan, Honduras, was heading to Texas to join his older brother who crossed illegally last year and has been working at a cattle ranch near Houston.

“He tells me they don’t pay as well as he thought but that there is work,” Chavez said on a recent afternoon while waiting in a food line at the Saint Juan Diego shelter in Tultitlan.

Built for 60 people, the single-room shelter crowded with double-decker bunks had been receiving up to 300 migrants a day, said the Rev. Christian Rojas.

Rojas said workers had to arrange makeshift beds on the concrete floor and in the patio to get as many people inside as possible. Migrants left outside were targeted by smugglers and passing drug traffickers, he said.

The migrants have also been the target of animosity from people in Lecheria, as the neighborhood surrounding the migrant center is known. It temporarily closed this week after people upset with clusters of men and women lingering outside their homes blocked the streets to stop volunteers from delivering food.

Gutierrez said the shelter closed because the government couldn’t guarantee the volunteers or the migrants’ safety.

“The migrants went from being in a situation of vulnerability, to a very grave situation,” she added.